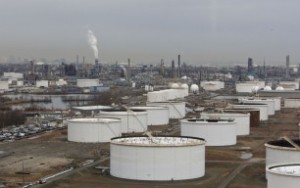 New Jersey Gov. Chris Christie says he wants to settle an $8.9 billion environmental lawsuit against ExxonMobil for just $250 million. That’s not even three cents on the dollar.

But it takes more than a single bribe to explain this rotten deal, even if Christie is running for president and hoping for more money from Big Oil. There’s a history of Rockefeller family power in New Jersey behind it.

The oil giant and its predecessor companies have been polluting New Jersey’s wetlands for over a century. It was held liable for poisoning 1,500 acres around the Bayway refinery in Linden and facilities in Bayonne. Linden became a cancer cluster for New Jersey refinery workers.

Christie is a vicious bully who loves to belittle and humiliate teachers at meetings. He wants to rob public workers of their hard-earned pensions.

But the Garden State governor is the meekest of mice when it comes to standing up to ExxonMobil, which had revenues of $407 billion last year. According to the World Bank, that’s more than the gross domestic product of South Africa’s 54 million people.

Rockefeller made his money the old fashioned way: He extorted it from railroads and forced them to sidetrack other companies’ tank cars. Competitors were driven to the wall when Standard Oil used creative tactics, like blowing up a rival’s refinery in Buffalo, N.Y.

Standard Oil gunmen killed at least nine people during a series of strikes in 1915 and 1916 at the company’s Bayonne works. The first victim was John Sterancsak, a Polish-American teenager.

Bayonne’s strikebreaking mayor, Pierre Garven, was on Standard Oil’s payroll. What a role model for Christie.

In 1894, Henry Demarest Lloyd wrote in “Wealth Against Commonwealth” that Standard Oil had done “everything with the Pennsylvania legislature except refine it.”  Rockefeller agents also barked out orders to New Jersey legislators.

New Jersey became a Rockefeller province like Venezuela was until Hugo Chávez was elected president and inaugurated the Bolivarian Revolution.

After the oil trust was broken up in 1911, Standard Oil of New Jersey became its biggest remaining piece. Relabeled “Exxon” in 1972, it merged with Mobil — another Standard Oil descendent — in 1999.

Along with Metropolitan Life and the Equitable insurance companies, Prudential served as a cash cow for decades for Rockefeller interests.

For years following Newark’s 1967 rebellion against racism, Prudential refused to invest hardly any money in its hometown. The Black and Latina/o city was economically strangled while corporations shut down factories in Newark and built offices in the suburbs.

So it’s not surprising that Christie is holding up Hurricane Sandy money for Hoboken, N.J., despite 80 percent of that city having been under water. Hoboken Mayor Dawn Zimmer said Christie’s people threatened to withhold the Sandy money if she didn’t approve a giveaway of three blocks to a Rockefeller real estate group. (CNN, Jan. 21)

Gov. Chris Christie is a bully towards poor and working people but he’s just another flunky for Rockefeller power.