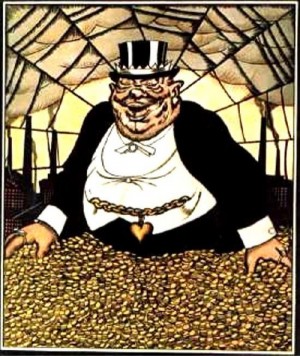 Did this trio find a cure for cancer, perhaps? No, not exactly. With much less effort, they used other people’s money to gamble on the stock market.

It would take 53,249 workers earning the federal minimum wage of $7.25 per hour to earn what Conway, D’Aniello and Rubenstein got. That’s assuming that all these miserably paid workers were able to work 40 hours a week throughout the year. But the reality is that hundreds of thousands of Walmart employees are forced to work part time in spite of their need for full-time employment.

The Carlyle Group is a “private equity firm” that controls nearly $200 billion in assets. Founded in 1987, Carlyle really took off when former Secretary of Defense Frank Carlucci became vice chair in 1989 and then chair in 1993.

With Carlucci on board, the Carlyle Group became the 11th-biggest defense contractor. Big bucks were made dealing with merchants of death like Northrop Grumman and General Dynamics. Even The Economist magazine — a ruling-class mouthpiece — admitted that “the secretive Carlyle Group gives capitalism a bad name.” (June 26, 2003)

Raoul Peck’s award-winning film “Lumumba” named Carlucci as one of those responsible for the assassination of ­Congolese independence leader Patrice Lumumba.

Along with Dick Cheney, Carlucci helped Donald Rumsfeld dismantle the “War on Poverty” program during Richard Nixon’s presidency. After waging war on poor people in the U.S., Carlucci, Cheney and Rumsfeld became successive heads of the Pentagon and waged war on poor people around the world.

A whole stable of influence peddlers

Before he became Texas governor and executed 152 people, George W. Bush was a board member of Carlyle’s Caterair International subsidiary. Bush is such a dolt that Rubenstein later admitted he had to kick him off the board. (Democracy Now! July 3, 2003)

But the younger Bush’s stupidity didn’t prevent Texas from pouring hundreds of millions into Carlyle’s coffers. Last year, the state’s Board of Education invested $75 million in one of Carlyle’s real estate funds. (Pensions & Investments, July 18, 2014)

Former British Prime Minister John Major brought to Carlyle his expertise in giving away the nationalized British railroads to speculators. This fire sale led to a series of deadly crashes, while Major went on to become chairman of Carlyle Europe.

Since 2001, Arthur Levitt — former chair of the U.S. Securities and Exchange Commission — has brought a legal veneer as a Carlyle “senior advisor.”

The Carlyle Group is named after the favorite hotel of Conway, D’Aniello and Rubenstein, located on New York City’s snooty Upper East Side.

This super luxurious hotel was named after the super racist Thomas Carlyle, who once wrote an essay entitled “The N——r Question,” lamenting the abolition of slavery in the British West Indies. (See the classic, “Capitalism and Slavery,” by Eric Williams, pp. 195-196.)

The next time you see someone forced to fish for discarded food in a garbage can, think about the $800 million in loot raked in by the bosses of Carlyle. And then fight like hell for socialism. n