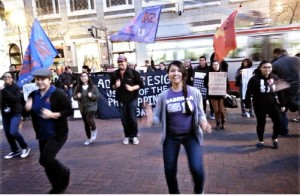 San Francisco — At an event entitled “Peoples’ Power: Aquino Resign,” over 100 people rallied and marched as part of a national day of action called by BAYAN-USA. Per their callout: “Feb. 25 is the 29th anniversary of Edsa 1 People Power Uprising that toppled the dictator Ferdinand Marcos, and BAYAN-USA organizations throughout the U.S. will hold a nationwide action to call for the U.S. puppet Aquino regime to resign and pay tribute to the lives of 60-plus victims of U.S. intervention in the Philippines. Filipino migrants and citizens alike continue to hold onto the aspirations for a genuine systemic change in the Philippines.”

The 60-plus victims refers to “the recent incident in Mamasapano where the lives of 68 Filipinos — 44 Special Action Forces, 18 Moro Islamic Liberation Front rebels and other residents in the area, including an eight-year-old girl — were lost. Fact-finding missions have retrieved evidence of U.S. military forces active in this incident.” U.S. complicity was highlighted by speakers in the rally, as the U.S. funds and provides training and weaponry to Aquino’s military.

U.S. OUT OF THE PHILIPPINES!