Maneuvers begin as bankers push back 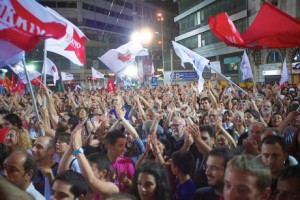 The new left social-democratic government of the Syriza party was swept into office in Greece on an anti-austerity program on Jan. 25. The party targeted the harsh neoliberal cutbacks, budget cuts and privatization imposed by the “Troika” — the International Monetary Fund, the European Central Bank and the European Commission.

The new government immediately took concrete measures against the austerity program imposed by the banks. As the Jan. 28 British Guardian put it: “One by one [the austerity measures] were rolled back, blitzkrieg-style, mercilessly, ruthlessly, with rat-a-tat efficiency.

“First the barricades came down outside the Greek parliament. Then it was announced that privatization schemes would be halted and pensions reinstated. And then came the news of the reintroduction of the 751-euro monthly minimum wage. …

“After that, ministers announced more measures: the scrapping of fees for prescriptions and hospital visits, the restoration of collective work agreements, the rehiring of workers laid off in the public sector, the granting of citizenship to migrant children born and raised in Greece.”

The measures that Syriza announced concerning an end to privatization and restoration of the workers’ standard of living are estimated to cost 13.2 billion euro. Despite the fact that Greece owes the Troika 240 billion euro, the Syriza government did not ask permission to break the austerity pact, which these measures surely do. (As of Feb. 2, 1 euro equals $1.13)

These acts sent a wave of hope through the broad masses and shock waves into the boardrooms of finance capital.

Previous governments had planned to raise funds by selling off to private capitalists and developers Greece’s two biggest ports, several airports, its power utility, a refinery and other public facilities, along with layoffs and cutbacks in workers’ wages, pensions and health benefits. All this was going to be done to pay for the bank loans made to previous Greek capitalist governments.

It is worth noting that, in fact, the Greek government is not really sovereign. It has no control over its currency, a vital function of any capitalist state. Control of the currency lies in Frankfurt.

The background to Syriza’s electoral victory is years of economic hardship, leading to years of mass struggle in the streets and workplaces.

Greece has been in depression for the last five years, with the official unemployment rate at 25 percent, 50 percent youth unemployment and an estimated half of the population living in dire poverty. People have been forced to forage in garbage dumps for food and household supplies, seek firewood and food in the forests, and subsist on food banks that have been set up in towns and cities.

This is the result of the global capitalist financial crisis. But it is aggravated by the fact that Greece has been in the vise-like grip of the predatory bankers in Europe, led by German bankers and the government of Angela Merkel, with the support of the entire banking establishment of the continent.

Years of struggle against austerity

But there has been fighting resistance. Mass anti-austerity demonstrations have rocked Greece since May 5, 2010, when two people were killed.

From May to July 2011, the “indignados” (“indignant ones,” a term originating in Spain) occupied squares all over Greece, and on June 5 of that year up to 500,000 people gathered outside the Greek parliament. The movement was violently suppressed by the police.

On Feb. 12, 2012, some 500,000 people demonstrated outside parliament. On June 9 of that year, there was a 24-hour general strike against austerity. On Nov. 17, 2014, tens of thousands demonstrated on the anniversary of the fall of the Greek dictatorship in 1974. The demonstration turned into an anti-austerity outburst.

Over the years there have been numerous mass demonstrations, sit-ins, occupations, strikes and general strikes. There were two general strikes in 2014, in April and November. Many have been called by the Greek Communist Party, which has a long history of class struggle and militant resistance and a strong base in the organized working class. Syriza’s base is more general, among unorganized workers, the youth and pauperized small business people. It also made gains among the suffering rural population.

This is the background to the Syriza electoral victory. The demonstrations, as frequent and strong as they have been, were not able to force the Greek political establishment to back off austerity. The parties and politicians of the two main parties are tools of the bankers, the developers, the ship owners and the big business media. Mass resistance so far has been unable to end the cruel “economic waterboarding,” as Yanis Varoufakis, the new Syriza finance minister, calls it.

So the Greek masses turned to a parliamentary solution, voting out the traditional capitalist parties and voting in Syriza.

But having won office, Syriza is now faced with an enormous contradiction. On the one hand, the leadership, headed by Alexis Tsipras, has challenged austerity. But ending austerity requires funds. On the other hand, European finance capital has control of the funds; they are the ones who imposed austerity in the first place. They are now taking a hard line on any form of debt relief. This is the basis for future struggle.

The Syriza government is seeking to negotiate a “new deal” with the banks — to give Greece respite from austerity and from a harsh loan repayment schedule in order to allow the economy to grow.

There are two parts to their demands. The first, and most fundamental, is that they want Greece’s debt to be cut in half. Second, they are trying to loosen the payment regime — lower interest rates, more time for payment, tying payment to economic growth and so forth. Both Finance Minister Varoufakis and Prime Minister Tsipras have said they intend to honor the debt, but they want the amount and the terms of payment to be modified.

Within hours of the Syriza victory, German President Angela Merkel ruled out any debt reduction. German Finance Minister Wolfgang Schäuble warned Greece about its negotiation tactics on writing off debt. In an interview with the London Guardian on Jan. 30, Christine Lagarde, head of the IMF, said that it is “payback time” for Greece and “parents must pay their taxes.”

Syriza’s strategy is to use the antagonism against the Merkel government to garner sympathy in other European capitals. Varoufakis immediately went to Paris to press this case. The French finance minister said he was sympathetic to Greece on the question of loosening loan payment conditions — but ruled out any debt relief. Varoufakis is scheduled to make the same pitch in Rome and London.

So long as this struggle remains within the financial constraints set by the bankers, trying to negotiate to loosen the chains around the necks of the people, the bankers have the overwhelming advantage.

This must be turned into a mass political struggle against the debt. In order for Syriza to have any leverage at the negotiating table, cancelling the debt must become a battle cry in the streets and the workplaces. All the forces in Greece who have demonstrated against austerity and suffered under its harsh conditions must mobilize to come out into the streets and send a clear message to the bankers. The financiers need to know that unless they cancel the debt, they are not just dealing with arguments about accounting and financial matters but with a threat to their very system.

No one should abstain from active participation in this struggle, regardless of historical or present-day differences. The masses must be imbued with the idea that the debt is illegitimate. For example, of the original 227 billion euro received in the Troika bailout of 2010, only 27 billion euro went to the Greek government to cover its expenses. The rest, 200 billion euro, went to the banks in loan repayment, bailouts, interest payments, etc. Meanwhile, Greek workers were losing their jobs and services and being plunged into depression-level poverty as conditions for the loans.

This struggle must not be lost. No one can afford to stand aside. Fascists like Golden Dawn are waiting in the wings to see if the masses will be left in the lurch. Then Golden Dawn and the right wing can move in to capitalize on the suffering and rally the forces of fascism and anti-immigrant pogroms.

All the more reason that the left, especially the revolutionary left, must be in the forefront of the struggle and win over the masses. If Syriza should falter or succumb to imperialist pressure on the implementation of austerity, then the left must be prepared to step in and give leadership.

Syriza, in order to obtain a parliamentary majority, has made an unsavory alliance with the anti-immigrant, homophobic right-wing Greek Independence Party. This party has been given the post of heading the Defense Ministry, which is extremely dangerous. The Greek military historically has fascist sympathies. This position gives the military a listening post at Syriza cabinet meetings.

It would be much better, if without joining the government, the Greek Communist Party and other left parties could pledge a united front in voting for genuine anti-austerity measures in the parliament as well as unity in the streets. Then Syriza would be assured of a parliamentary majority on its anti-austerity program, even if it ruled as a minority government. Then it would not have to rely on the Independence Party.

On the other hand, it is very encouraging that the new Podemos Party in Spain, an anti-austerity party, was able to rally several hundred thousand people in Madrid in the wake of the Syriza electoral victory. This points toward the need to broaden the struggle to all of southern Europe, as well as Ireland — to everywhere the working class and the population are living in a state of debt slavery to the banks.

The bankers have been threatening the Greek people with being put out of the eurozone if the government defaults or the agreements are violated. They hope that threatening conditions of financial chaos and economic ruin will force everyone to fall back in line.

But should Greece have to exit the eurozone — should the bankers try to plunge the country into a state of economic dislocation and strangulation — that would be the signal for the working class to combat the crisis by seizing control of the economy and reorganizing it on a socialist basis.

In the long run, an international struggle to overturn capital altogether is the only permanent way out of the present crisis.