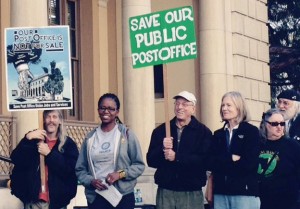 Berkeley, Calif. — At noon on Dec. 6, more than 150 people gathered on the steps of the main Berkeley Post Office to demand that this historic building not be sold. Supporters sang “We Shall Not Be Moved” for an infomercial that organizers hope “will go viral.”

The protest marked the longest occupation of the Berkeley Post Office, which has lasted over 40 days. A local group of homeless activists called “First They Came for the Homeless” has led the effort to occupy the area outside the building.

This group had previously set up a protest encampment outside the local Staples store. Staples has forced its low-paid, non-union workers to perform U.S. Postal Service jobs, thereby aiding the closure of U.S. post offices. Every Staples store has a USPS sign in its window and contains a mailing station similar to those at the post office. Encampment organizers say Staples aids the union-busting efforts to privatize the USPS. Through its information booth, the encampment is fighting to “Save the Public Commons,” which includes the public services of the USPS.

Local organizer and Berkeley attorney Moni Law announced at the rally that Hudson McDonald, one of the largest developers in Berkeley, had recently backed out of an earlier commitment to purchase and develop the main Berkeley Post Office. Law challenged the crowd to continue its efforts to stop all attempts to close the historic building.

Dave Welsh, a retired postal worker, singer and activist, talked about the importance of the continued occupation of the post office. “On Thursday, December 4, we received word that the encampment was being raided by the postal police inspectors. We brought a large group down to support the encampment. The tents were confiscated but the information booth remains.”

Welsh described some victories in the national campaign to Save the People’s Post Office. He credited the success in stopping the closure of the Berkeley Post Office to the strong support of the local community.