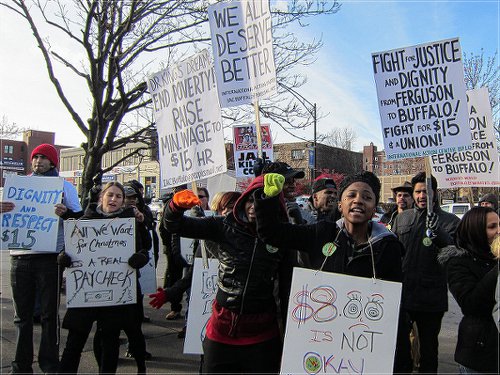 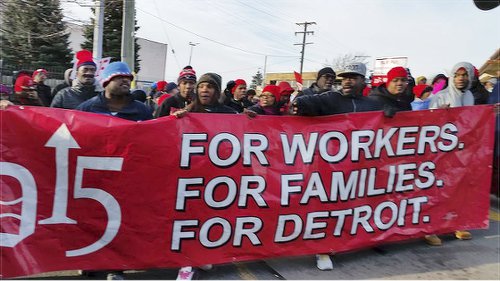 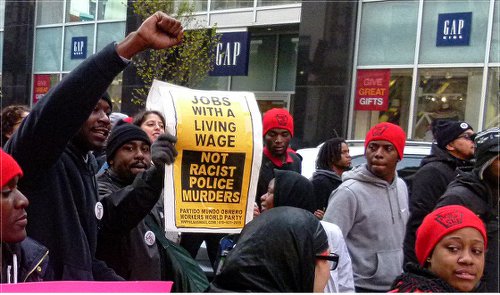 December 4 was a phenomenal day for fast food workers. They shut down the grills, closed the cash registers and walked off their jobs, joining their brothers and sisters in a one-day strike in 190 cities. It was the eighth and most far-reaching strike day so far since fast food workers began their walkouts two years ago in their fight for a $15 hourly wage and a union.

The strikers showed great courage. Without labor union protection, they are  risking their jobs to fight for their rights and those of other low-wage workers. Their bravery and militance are a boost to all working people —  organized and unorganized.

This strike day was the largest action thus far in the nationally coordinated campaign launched by organizations, including the Service Employees union. Each action has brought more workers in more cities into the streets. As they feel their power in united actions, the strikers attract more solidarity and inspire other workers to participate. December 4 marked the biggest labor protest in years.

Millions of fast food and other low-wage workers are Black and Latino/a.  Most earn the $7.25-an-hour federal minimum wage or a few cents more, even with raises. Most work two or three jobs to provide for their families, often staying in the same dead-end jobs for years. The fight for $15 is vital to their survival.

Meanwhile, their corporate employers rake in megaprofits. The fast food industry alone rakes in $200 billion annually — by superexploiting their workforces. Big companies enjoy bigger profits than ever, while the workers’ portion shrinks.

Protesters from the We Deserve Better Workers Assembly took to the streets in downtown Baltimore, chanting, “Hands up! Give workers $15 and a union!” The march ended at Jimmy John’s restaurant where workers walked off the job.

Atlanta protests included one at a Kentucky Fried Chicken and another across from a McDonald’s near Atlanta University Center. Dozens of fast food workers participated, with home care providers and members of the Service Employees, American Federation of State, City and Municipal Employees, Coalition of Black Trade Unionists, postal workers, Teamsters, Georgia Standup, Moral Monday, Jobs with Justice and 9 to 5. Spelman College students came, along with faith-based and civil rights leaders.

The group took over part of the KFC parking lot, then marched to a Family Dollar store. Chants demanded higher wages in addition to “Hands up! Don’t shoot!” The International Action Center banner read, “Support Fast Food Workers’ Fight for $15/Hour and the Right to Join a Union!” Passing motorists showed support.

Philadelphia fast food workers and supporters urged McDonald’s customers to eat an alternative free breakfast on tables outside the store. Strikers urged Center City store workers to walk out; some did. A march ended with a rally outside McDonald’s. As they passed police, marchers chanted, “Hands up, don’t shoot!” in memory of Michael Brown.

Fast food workers marched, rallied and chanted for $15 an hour and a union at fast food eateries on Buffalo, N.Y.’s Main Street. Families, community groups and union members joined the actions, organized by the Coalition for Economic Justice. Signs were in hot demand, which connected the fast food workers’ struggle and the anti-racist fight for justice.

Hundreds of people, mostly Black youth, carried out a militant march and speakout at two McDonald’s restaurants in Detroit. Over a dozen squad cars, a police bus and a surveillance tower did not deter demonstrators from taking the street. They marched across busy Van Dyke Avenue, up to the tower and the cops, chanting, “Hands up, don’t shoot!” Protesters then marched to another McDonald’s on Eight Mile Road, where low-wage workers spoke about why they were striking and their struggle to feed their families and survive on the minimum wage.

A diverse crowd of fast food workers and their supporters in Rockford, Ill., demanded a livable wage, paid overtime and the right to organize. Workers from there and the surrounding area rallied at many McDonald’s locations. They pledged to strike until their demands were met. Chicago’s passage of a $13/hour minimum wage has given workers renewed confidence in a victory, thiough it’s still short of what they deserve.

Demonstrators observed a moment of silence for victims of racist police brutality at a rally at Rockford’s Unitarian Universalist Church.

Home care providers and other low-wage workers joined large actions in Madison, Milwaukee and elsewhere in the state. Wisconsin Jobs News supported them. Sponsored by RaiseUpMKE, hundreds of multinational low-wage workers marched to and through the Bayshore Mall in Milwaukee, where workers are superexploited in poverty-wage jobs. They rallied in the rotunda, calling out, “Hands up, don’t shoot!.”

Several protests took place in Los Angeles. A multinational group of about 1,000 people, many young, rallied at a downtown McDonald’s, then marched to City Hall for another rally. The Service Employees union mobilized. When a speaker announced a moment of silence for victims of police violence, everyone raised their hands in solidarity.

LA Workers Assembly placards asserted, “Jobs with a Livable Wage, Not Racism and Police Murder.” People eagerly signed their petition to put the $15/hourly wage on the ballot. Many will join the Dec. 11 car caravan from LA’s Harriet Tubman Center to McDonald’s Regional Headquarters in Long Beach, Calif., to fight for $15.

Community activists, fast food workers, members of OUR Walmart and unions, including SEIU, rallied at the Fruitvale BART (Bay Area Rapid Transit) Plaza in Oakland and marched to McDonald’s. A few hundred people briefly took it over, as others rallied outside. Some workers walked out.

These brave strikers are setting an example for all workers; their struggles must be supported.