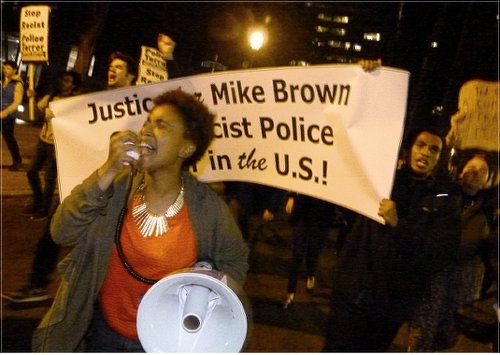 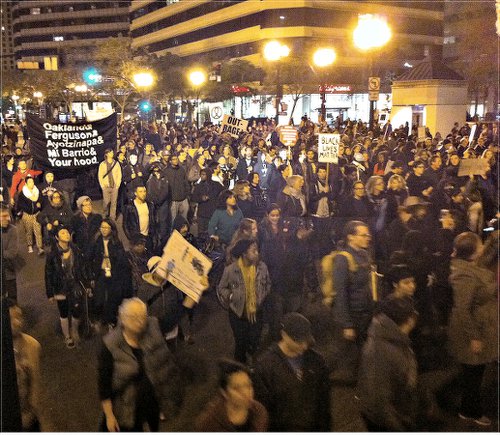 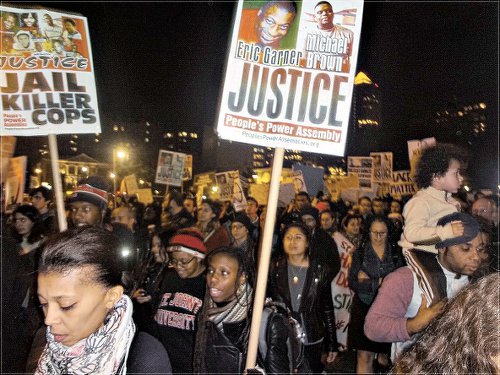 Members of the Ferguson and St. Louis, Mo., communities started gathering in front of the notorious Ferguson police station on Nov. 24, hours before the pro-cop state prosecutor, Bob McCullough, announced to the whole world the grand jury findings on whether a white police officer, Darren Wilson, would be indicted for killing an 18-year-old African-American youth, Michael Brown, on Aug. 9.

Once McCullough stepped to the podium, 20 minutes late for an 8 p.m. start time, he made the predictable but still shocking announcement that there was no probable cause to view the killing of Brown as a crime.  So therefore, another white cop was let off the hook for taking the life of a Black youth.  It was revealed that Wilson shot 12 times at Brown and struck him at least six times.

Even bourgeois legal experts were dumbfounded at how McCullough presented the so-called facts in the ruling more as a defense attorney for Wilson, rather than a prosecutor whose job is to supposedly look for testimony to seek an indictment. Instead, McCullough chose to portray Brown as the aggressor and Wilson as the victim.

Months before the ruling came down, community activists had marched to demand that McCullough be removed and replaced by a special prosecutor for this case. Gov. Jay Nixon refused to heed this demand.

Following McCullough’s statement, an understandably outraged Ferguson community took out their anger and frustration at once again being denied justice by setting fire to several police cars, burning some businesses and generally taking to the streets.

As the big-business media, led by CNN, repeatedly violence-baited the protests led by disenfranchised Black youth, the police responded with tear gas, bean bags, armored tanks and threatened unarmed demonstrators by pointing guns at them. News media report that more than 60 people were arrested. Interstate 40, located between Ferguson and St. Louis, was blocked by activists.

Spontaneous demonstrations erupted around the country in protest of this travesty of justice for Michael Brown and all victims of police brutality. More demonstrations are being planned for Nov. 25. Protests have taken place or are scheduled in more than 135 cities across the United States.

In Oakland, Calif., some 2,000 anti-racist protesters took to the streets, taking dozens of arrests. Activists blocked Interstate 580 at three different points in succession. Cops shot rubber bullets at looters later that night. Tear gas was used on people on the freeway and also during the looting, which occurred mostly on Broadway, including a Starbucks and Smart N Final. There was at least one bank window smashed and graffiti written on some stores.

In Seattle the night of Nov. 24, police made arrests and pepper sprayed militant protesters who taunted cops and threw rocks and fireworks, as well as causing the closure of Interstate 5. The next day, thousands, including hundreds of high school students, again took to the streets. (komonews.com, Nov. 25)

In New York City, protesters left Union Square and broke off into separate marches, including one to Times Square and another uptown to Harlem. At Times Square, New York Police Department Commissioner William Bratton (along with members of his security detail) was splattered with fake blood. On Nov. 22, yet another unarmed Black male, Akai Gurley, was gunned down and killed by an NYPD cop in a building stairwell in Brooklyn. Bratton called the cop “totally innocent” even though a New York medical examiner ruled the death a homicide. (nbcnewyork.com, Nov. 24) Thousands of angry protesters later tied up traffic and temporarily shut down the Manhattan Bridge, the Brooklyn Bridge and the Triborough Bridge.

Hundreds in Philadelphia, after listening to the broadcast on the Ferguson grand jury’s failure to indict the killer cop, marched angrily with signs and banners through at least five neighborhoods for four hours and blocked two expressway on ramps. More protests are planned.

Chanting “No justice, no peace!” a multinational, multigenerational crowd rallied “to stand in solidarity with the people of Ferguson” in downtown Syracuse, N.Y. One demonstrator carried a sign that read, “Death to racism.” The action, called by the local branch of the National Action Network, gathered at noon in front of the Hanley Federal Building. Other organizations represented were the Syracuse Peace Council, Mothers Against Gun Violence, the Answer Coalition, Workers World Party, and students and teachers from the recent anti-corporatization occupation at Syracuse University.