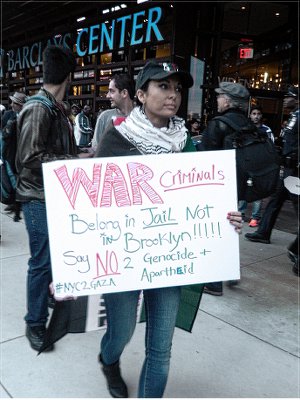 Protesters, including many from the Jewish community, voiced support for Palestine outside Brooklyn’s Barclays Center on Oct. 7, when the Israeli basketball team Maccabi Tel Aviv was there to challenge the Brooklyn Nets.

Previously, on Aug. 11, a large multinational force of people had protested Zionism at the same venue because its namesake, Barclays Bank, profits from arms sales to Israel. These forces returned on Oct. 7 to chant to those attending the evening game, “Hey, hey! Ho, ho! The IDF [Israel Defense Forces] has got to go!” and “Palestine — slam dunk! Stop the occupation!”

Fliers distributed by activists with Jewish Voice for Peace explained their protest stating that “a basketball game should not be used as a context for paying tribute to an army and soldiers who have been involved in war crimes.” The flier also quoted former National Basketball Association player Etan Thomas: “It sends the wrong message, especially coming off the heels of the slaughter of more than 2,000 Palestinians last month. Friends of IDF, at their VIP celebration at the Barclays Center prior to the game, will ‘honor’ twelve wounded soldiers from the recent Gaza conflict. Are they also going to honor the hundreds of innocent Palestinian civilians — mostly women and children — who were massacred?”

Later there was a struggle when Palestinian flags were raised at the game — and so many cheers when the Brooklyn Nets beat the Israeli team!