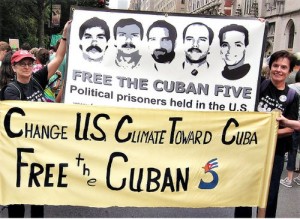 The Service Employees union headquarters ground-floor meeting room in Washington, D.C., was standing-room-only on Sept. 13 for the premiere of Cuban 5 Antonio Guerrero’s newest watercolors, followed by music, spoken word, the debut of a three-minute “Discover the Five” animation video and a panel of speakers, including Cuban Interests Section Chief José Ramón Cabañas.

Guerrero created the paintings to mark the 16th year of unjust U.S. imprisonment of the Cuban 5. Guerrero, Ramón Labañino and Gerardo Hernández are still being held in U.S. prisons. Fernando González and René González have returned to Cuba after serving their full sentences and are fully engaged in the global organizing to free their comrades.

Gerardo Hernández — vindictively sentenced to two life terms plus 15 years — wrote from prison in Victorville, Calif.: “I cannot reiterate enough the importance of you once again holding activities in the U.S. capital calling for our freedom. This is the place to keep telling the truth about the Cuban Five. This is the place to let U.S. authorities know that it’s about time to correct the grave travesty of justice that our case represents. …

“On behalf of the Five … I would like to thank the Service Employees International Union for providing their hall for you to use, showing once again the important role that organized labor has in the solidarity movement calling for our freedom.” (theCuban5.org)

Valarie Long, international executive vice president of the Property Services Division of the SEIU, welcomed the gathering to labor’s house on behalf of 2.2 million SEIU members, SEIU International President Mary Kay Henry and the officers of the SEIU. “I believe that if we do not look more to issues globally around the world, we are going to be lost here in the United States,” Long stated. The Property Services Division represents more than 400,000 workers across North America.

Long said that the Cuban 5 had been unknown in her circle of family and friends before she told them about speaking at this event. And when they learned, their reaction showed they understood the injustice.

Raising Michael Brown and Amadou Diallo and all the atrocities that happen here in the U.S., Long said, “We do not have the common decency to recognize that people in other countries have the right to have sovereignty. … It is not fair that these men have been in prison so many years. … We can do better. I am sure that with … more solidarity in the labor movement, we will do better and these men will be made free. … Let’s make sure that President [Barack] Obama and all the powers-that-be hear our voices.”

The Sept. 13 panel included Stephen Kimber, whose book, “What Lies Across the Water: the Real Story of the Cuban Five,” just won the 2014 Evelyn Richardson Award for Nonfiction at Canada’s East Coast Literary Awards; Yeidckol Polevnsky, the former vice-president of the Mexican Senate; and a statement from Ann Wright, anti-war activist and former U.S. army colonel. Piero Gleijeses, a professor at Johns Hopkins University and expert author on Cuba’s role in Africa, noted that Cuba sacrificed the possibility of ending the U.S. blockade against the country by following its anti-apartheid principle.

The public meeting culminated days of congressional visits and a picket in front of the White House, followed by a reception at Impact Hub DC and a community meeting hosted by the Takoma Park, Md., Committee to Free the Cuban 5. The International Committee for the Freedom of the Cuban 5 completed the third “5 Days for the Cuban 5” in Washington only a few months earlier, in June.

The highest levels of the labor movement in Britain and Ireland and many other countries recognize the injustice done to the Cuban 5 and their families. Unable to hear directly from the Cuban 5 family members, that recognition among labor in the U.S. has been slow going.

Since 2008, the labor movement in Britain and Ireland has reached out to its U.S. counterparts. Tony Woodley, former general secretary of “Unite the Union,” visited Gerardo Hernández and in 2011 spoke in Los Angeles at the first labor-organized meeting in the U.S. to build awareness about the case. That British and Irish trade union boasts 1.4 million members.

The Sept. 13 event built on outreach to rank-and-file union leaders that has been done through information tables at the 2012 SEIU Convention and flyer distributions at the Longshore Workers union, the 2013 Women of Steel Convention, a meeting hosted by the postal workers in Washington and the 2014 Steelworkers convention.

To see photos and more information, go to theCuban5.org