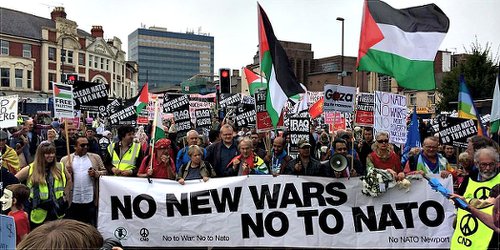 Imperialist heads of state at the Sept. 4-5 NATO Summit in Newport, Wales, met under U.S. pressure to escalate their anti-Russia maneuvers regarding Ukraine, to schedule their gradual exit from Afghanistan and to open war on the Islamic State.

The summit’s proposed goals all involved making NATO capable of rapid intervention on three continents, far from the North Atlantic region. While it was apparent that the U.S. would face reluctance from member states throughout the alliance, there was no mistaking Washington’s aggressive intentions.

President Barack Obama pushed a proposal to increase military spending by all NATO members to at least 2 percent of gross national product. The U.S., the center of world imperialism, usually spends more than 4 percent. The only other NATO countries currently spending more than 2 percent are Turkey, France, Portugal, Estonia and Greece. (International Business Times, Sept. 4)

All Europe is in a severe economic recession, with pressure on all national governments to cut spending. While all these governments avoid openly confronting Washington, funding NATO faces many obstacles.

Most of the NATO countries’ increased spending would purchase weapons from the U.S.-based military-industrial complex. Using national budgets to buy more arms would decrease the funds available for social services for the working class, which is already hurt by in-place austerity programs.

Obama’s original plans to maximize economic sanctions against Russia were upended by the recent successes of the anti-fascist resistance in Ukraine against the coup-government in Kiev. The sanctions hurt the West European economies along with the Russian people. French shipbuilders winced as they cancelled billions of dollars’ worth of sales to Russia, and German manufacturers were forced to find ways to work around the sanctions.

The imperialist heads’ answer to Kiev’s collapse in the Donbass region was to set up a 4,000-troop, rapid-deployment force to throw into battle at any point in the world on a few days’ notice. Given the confrontation with Russia over Ukraine, this new force could only be seen as a provocation that could lead to an extremely destructive war.

Obama and British Prime Minister David Cameron wrote a joint opinion statement in the London Times on Sept. 4 calling on NATO to confront the organization known as ISIS or ISIL, now called the Islamic State, which controls some territory in Iraq and Syria.

Obama then used the presence of so many heads of state at the summit to set up a new coalition to coordinate an assault allegedly aimed at eradicating ISIS. The 28 NATO states weren’t united on this initiative for a “war on ISIL,” however. Obama plans to appeal to the U.S. public with a major televised speech Sept. 10 pushing this new aggressive move.

Reuters published on Sept. 5 that “Secretary of State John Kerry and Defense Secretary Chuck Hagel told foreign and defense ministers from 10 nations at a hastily arranged meeting that there were many ways they could help, including training and equipping the Iraqis. … Hagel told ministers from Britain, France, Germany, Canada, Australia, Turkey, Italy, Poland and Denmark that they, with the United States, formed the core group for tackling the Sunni militant group.”

These risks include conflict with Russia. They also include putting “boots on the ground” in Iraq and/or Syria once the bombing raids on these countries prove ineffective. And behind the anti-ISIL rhetoric are the continued plans for regime change in Syria.

To counter these war moves, demonstrators outside the NATO meeting faced down the 9,500 police and military guarding the imperialists and other heads of state and raised their slogans: “No new wars! No to NATO!”