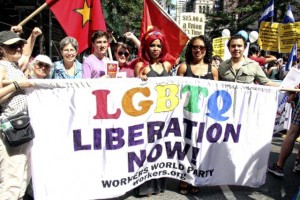 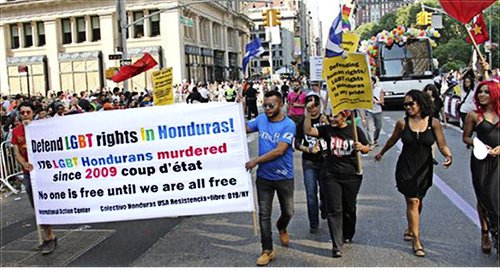 Workers World managing editor LeiLani Dowell spoke with Nelson Arambú, a leader of the LGBT ­community in Honduras and a member of the Move­ment of Diversity in Resistance, who was in New York City as part of a speaking tour on June 30.

Workers World: Can you describe the situation for the LGBT movement in Honduras?

Nelson Arambú: The LGBT movement in Honduras is currently facing two issues. One is the continued assassinations of movement leaders. This issue needs to be kept alive in the solidarity movement outside of Honduras, because on the ground it’s a question of life and death. It’s also an issue beyond one just facing the LGBT communities, because many of the LGBT leaders being assassinated are also leaders in the broader human rights struggles in the country.

The second issue is the effective shutdown of several LGBT organizations in Honduras. This is partly because funding has dried up for some of these organizations. But the bigger problem is that the government issued reforms to close human rights organizations, beginning in February. This has had an impact on women’s, Indigenous and youth organizations but has specifically targeted organizations providing services to transgender women.

These groups, mostly human rights organizations, were given notice that the government was going to review their operations and registration. With this tactic — the narrative that it is reviewing registrations — the government has effectively rendered these groups inoperable, since they are not allowed to function while the investigation takes place. Some 300 organizations have been forced to close their doors upon review.

The government has also been trying to limit human rights assistance from abroad. This has to be seen in the context of the government’s limiting of their own ministries. The two governments elected since the coup have been closing down ministries that previously existed to address rights for women, Afro-descendants, Indigenous people and children. It also has to be seen in the context of the appointment of a new human rights commissioner with documented links to the military and absolutely no experience with human rights work. The new commissioner was chosen over Joaquín Mejía, a candidate with lots of experience who actually holds a Ph.D. in human rights. We interpret all this as an attempt to limit the role of human rights organizations in the country.

WW: What is going on with the National Popular Resistance Front (FNRP) and the Libre Party right now in Honduras?

NA: Both Libre and the Anti-Corruption Party (PAC), which came in fourth in the elections, have had an impact on the legislative process in Honduras. Before these parties arose, the country was ruled by a two-party system with no significant debates. Now there is a break in politics — it could be said that Libre and PAC are fucking the system by bringing relevant issues to the floor.

They don’t have it easy. Two months ago, Libre members were outside the legislative building protesting the exclusion of Libre from the governing body of the electoral tribunal — Libre came in second in the elections in terms of votes, so how was it possible that they were excluded from the governing board?

There is an attempt to clean up the face of the ruling National Party, and a key element of this is the participation of the U.S. in this effort. The U.S. has interest in whitewashing NP’s corrupt and repressive measures by either supporting statements, or making their own statements outright, that the NP is improving the human rights situation in the country. This U.S. collaboration feeds into a narrative that aids the government in dismissing the work of Libre and the FNRP as simply the work of rabble-rousers, with no real impact on public discourse.

This is felt outside Honduras as well. It’s already difficult to bring to light what’s happening in Honduras, and even more difficult when the U.S. is highlighting the human rights and security advances in the country.

WW: What would you like to tell people in solidarity with Honduras outside of the country?

NA: I believe that in attempting to change the situation in Honduras, outside solidarity is most important — especially solidarity from people in the U.S. In Honduras, migrants to the U.S. are now one of the largest sources of income, and U.S. foreign aid has a huge impact on what things on the ground feel like. As the country with the most influence on Honduras, the U.S. has immense responsibility.

I would ask people in the U.S. to ask themselves how they can influence what the U.S. invests in Honduras. Do you allow the government to allow the transfer of funds to an authoritarian government under the guise of a humanitarian cause?

The impact of U.S. foreign aid to Honduras can be seen in the migrant child crisis at the gates of the U.S., which I call a crisis of the displaced. The U.S. recently announced an increase in funding for the police and military in Honduras from a discretionary fund in an attempt to stabilize the country. This is absurd — it will only add fuel to the fire. A responsible U.S. government would ask the Honduran authorities what they’re doing with their finances, because all the human rights aid is not yielding any results.

The U.S. is funding a war against narco trafficking in Honduras, but what is the real consequence? It’s the assassination of Hondurans. The U.S. claims that it is arming the country as a result of narco trafficking, but the consequences of the arming is murder.

I ask people in the U.S. to spread the word that the U.S. is funding a low-intensity war in Honduras, under the guise of fighting the war on drugs, and abetting rising crime. Meanwhile, they’re building military bases in Honduras. In the five years since the 2009 coup, some 25,000 people have been assassinated.

People in the U.S. should be aware that the U.S. government is funding a corrupt, undemocratic government. Some 17,000 have been internally displaced, while thousands more have fled the country. The majority of the migrant children at the border detention centers in the U.S. are from Honduras, roughly 50,000 children. When interviewed, they say that they are simply fleeing the violence in their country.

The U.S. authorities should be thinking about what will happen in the short and long term. With Hondurans fleeing violence and poverty, the number of migrants is sure to increase. It is in their interest to solve this mess.