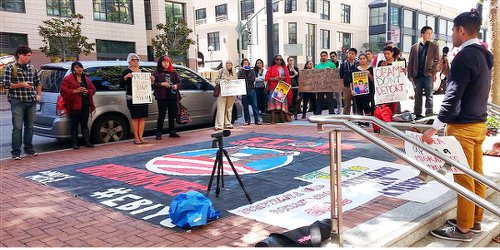 Oakland, Calif. — The East Bay Immigrant Youth Coalition and the California Immigrant Youth Justice Alliance held a press conference July 3 at the Oakland federal building to demand President Barack Obama not deport children seeking asylum at the border. The groups’ press release declared, “In the wake of troubling reports that President Obama will seek to weaken a 2008 law that protects refugee children in order to speed up the deportations of Central American children fleeing violence in their home countries, local immigrant rights groups and allies … express outrage and demand that the President change course.”

“After denying the immigrant community the right to family unification by refraining to use his executive power to end deportations and truly focusing to offer administrative relief, the president is now trying to use that same executive power to massively deport these children,” said Vazquez, who has pushed for administrative relief and supported the admission of refugee children. “It would be an enormous disgrace if the only thing this administration passes is a legislative measure to massively deport young children to countries where they face insecurity.”

Aldana talked about his own recent experience of being detained at the border. He had returned to Mexico to visit his ailing grandmother and was detained for two months after he attempted to return to the U.S. Aldana conducted his trek openly in order to bring public attention to the issues. He also described the conditions and additional oppression faced by LGBTQ migrants, who are separated by sex and subjected to strip searches, intimidation and humiliation.

According to the press release, “The California Immigrant Youth Justice Alliance and local immigrant rights organizations demand that the President do the following: Grant these children refugee status under international and U.S. law; not expand Detention Center capacity to keep them detained; and use his Executive Power in order to stop all deportations.”