SAN FRANCISCO  Many national and local organizations, including the Answer Coalition, the Bay Area Latin American Solidarity Coalition, the International Action Center, Veterans for Peace, Codepink, World Can’t Wait and Workers World Party, came together in San Francisco on June 22 to demand “No new U.S. war on Iraq!” Over 200 people rallied at the busy corner of Powell and Market streets, then marched to Union Square and back, with shoppers and motorists pausing to listen as the marchers shouted “Money for jobs and education, not for war and occupation!” 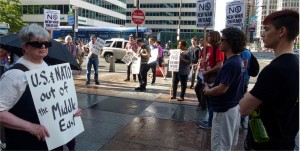 PHILADELPHIA  Activists protested June 19 at 15th and Market streets in Center City Philadelphia against any U.S. military intervention in Iraq. They chanted, handed out fliers and spoke out over a sound system to passersby. An ad hoc coalition made up of Philly Against War, the Answer Coalition and the International Action Center organized the demonstration.