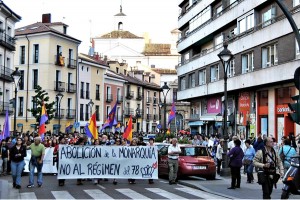 Movement calls for referendum on the monarchy.

June 3 — King Juan Carlos I of Spain was forced to announce his abdication on June 2 after mass popular revulsion, heated by six years of economic crisis and 26 percent unemployment. The big question now is whether this opening of the valve on the social pressure cooker will blow off steam without causing an explosion.

The royal family had reached a low point in popularity, all of them entangled in corruption and scandal. On top of this, the two main ruling class parties — the rightist Peoples Party and the “Socialists” (PSOE) — had just suffered a joint disaster in the European elections, getting less than 50 percent of the vote from the few who participated.

The bankers and bosses wanted stability. Juan Carlos wanted to assure his succession — and perhaps guarantee his immunity from criminal charges. So upon abdicating, he immediately announced that his son Felipe would succeed him as king.

Will the working class simply be relieved that finally they got rid of this super-rich, corrupt and degenerate king; this symbol of the continuation of the 1939-1975 Franco fascist and military dictatorship, with its oppression of the Basques, Galicians, Catalans and other peoples; this bastion of the current rule of finance capital?

Or will the abdication — a concession to popular sentiment — followed by the attempt to continue the monarchy lead to a social explosion?

The immediate reaction in Catalonia, the Basque Country, Galicia, the Canary Islands and the rest of the Spanish state was to call for protest demonstrations that same evening. At first it was just in Barcelona and Madrid, but within hours the protests spread to at least 60 cities in all regions.

“Abolish the monarchy!” “The Catalans have no king!” “Seville for the republic!” Probably the most widespread slogan was, “Referendum on the royals!” Many of the organizations raised the call for a referendum to decide the fate of the monarchy.

Already the Peoples Party government and the leadership of the PSOE have refused any referendum. Prime Minister Mariano Rajoy insisted that first there must be a change to the Constitution, which doesn’t allow a referendum. Ironically, neither does the Constitution allow abdication or succession.

Puerta del Sol in Madrid and Plaza Catalunya in Barcelona drew the largest crowds, but throughout the Spanish state there were significant protests. All the workers’ and communist parties took part, as did newer left organizations of “indignant youths” that arose from the 15M movement three years ago. This was a forerunner to the Occupy Wall Street movement in the U.S. Youths face more than 50 percent unemployment in Spain.

Though it ended 75 years ago, Spain’s 1936-1939 Civil War still resonates in today’s social struggles. Workers’ militias defended the Spanish Republic then against a military-fascist coup regime. The war was at its roots a social struggle against the capitalist and land-owning ruling classes.

Backed by Nazi Germany and fascist Italy, Francisco Franco’s generals won the war. They then smashed the workers’ organizations. They murdered, imprisoned or drove into exile hundreds of thousands of people.

General Francisco Franco’s iron rule endured until his death in 1975. In 1969 he had hand-picked Juan Carlos, a military officer, to be king so as to institutionalize and give continuity to the centralized fascist rule after his death.

In 1978, a compromise was worked out between the politicians rooted in Franco’s Falange Party and the underground anti-fascist opposition. It left most of the fascists in office but allowed the opposition to legally contest elections. This deal, called the “transition,” also left big capital in control while papering over the society with “democracy.” Regular elections since have alternated between the Peoples Party and the PSOE taking office.

In 1981 an attempted military coup tried to eliminate even this compromise. Juan Carlos I made his only popular move ever, coming out against the coup. Everything since has only damaged his reputation with the masses, and rightfully so.

He even secretly — until exposed — hunted elephants in Botswana on the government’s dime. He is probably best known in this hemisphere for telling Venezuela’s popular President Hugo Chávez to shut up at a 2007 meeting. Chávez had the last word.

The king is synonymous with the rule of corrupt big capital and with centralized federal rule over the many peoples within the Spanish state who struggle for self-determination. Before he abdicated, Juan Carlos I was about as popular in most of the Spanish state as L.A. Clippers owner Donald Sterling was among National Basketball Association players.

If the masses accept the reality that it was they who threw out the king, they can go on to throw out the monarchy.

The movement may debate whether to demand a referendum or an immediate end to the monarchy, or if the struggle should explicitly make demands for socialism and for self-determination of oppressed peoples. Given Spain’s history, any struggle for a republic reraises the historic conflict of the Civil War and will almost automatically open the door to working-class demands — jobs, benefits, control of industry and banking, and in the end, for socialism.