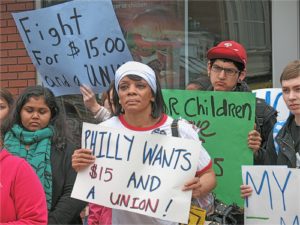 Philadelphia — Low-wage workers and their supporters gathered outside a McDonald’s restaurant here on April 3 for the second time in two weeks to challenge the megacorporation’s theft of workers’ wages and its negative treatment of employees and customers alike. Both demonstrations were organized by “Fight for $15” and called for a union for the company’s workers.

Chanting “McDonald’s, come off it! You make enough profit!” and “McDs, you’re rich and rude! We don’t like your attitude!” protesters filled the sidewalks in front of the store and spilled into the street.

Passing motorists responded with enthusiasm to signs asking them to “honk for a $15 minimum wage,” frequently drowning out rally speakers. A highlight of that moving support was when a Philadelphia sanitation worker drove by in his garbage truck, blasting the horn. Philadelphia’s blue-collar workers represented by the American Federation of State, County and Municipal Employees Union, District Council 33, have worked without a contract since 2009.

Several low-wage workers participated in the rally, including Justin Watson, head of maintenance at the McDonald’s being picketed. Watson spoke of his two-year struggle to support his family on the low wages McDonald’s pays and a fight to get the company to pay a promised raise.

“If someone robbed your house, you might have some recourse,” Watson said, “but as a professional corporate thief, McDonald’s gets away with stealing workers’ wages.” In March, McDonald’s workers in three states filed class-action lawsuits claiming that McDonald’s schemed to drive labor costs down by not paying overtime and striking hours off time cards.

Watson described a meeting with his bosses after the first protest action. “They asked me what was going to make me happy, and I responded, ‘$15 and a union!’”

After working two years at Dunkin’ Donuts/Baskin-Robbins, Crystal Lopez still doesn’t get paid time-and-a-half for overtime. Lopez works to support her mother, who has chronic health concerns. But the company cut her work hours after she participated in a protest. She told the crowd, “We deserve to be treated as humans. We’re gonna win no matter what. If everybody stands with us, we’re good!”

McDonald’s worker Justice Wallace stated, “The cost of living is way too high, and we are being paid way too little. McDonald’s treats us like children, but we are parents with our own children to support, and we can’t do it on $7.25. We are constantly forced to choose between paying rent or buying groceries.

“I believe that a terrible crime is being committed in this city by companies like McDonald’s that are engaged in wage theft. I also believe that one day we will make $15 an hour,” Wallace concluded.