More than 80 events were held across the U.S. around the theme of “Not 1 More Deportation!” on April 5, the date immigrant rights activists estimated that the 2 millionth person would be deported under the administration of  President Barack Obama. The actions were coordinated by the National Day Labor Organizing Network, which says that the 2 million deportations are “2 million too many.”

The following is a sampling of the actions that took place.

Many people and organizations are rallying to the side of a prisoners’ hunger strike that began on March 7 at the Northwest Detention Center in Tacoma, Wash. Despite retaliation, the immigrant strikers continue to press their demands against brutal racist treatment and an end to the plague of deportations.

The strike has also spread to prisoners in at least one other prison, in Conroe, Texas. The GEO Group Inc., which calls itself “the world’s leading provider of correctional and detention services,” owns both the Tacoma and Conroe prisons.

More than 100 demonstrators gathered in front of the Wells Fargo bank building downtown on April 5, then marched through downtown and down to the detention center. Wells Fargo owns a huge amount of GEO stock.

At the detention center, the protesters joined with hundreds of others holding banners and with many families with children. They marched in front of the detention center, chanting “¡No están solos!” (“You are not alone!”) loud enough for the prisoners to hear. The march and rally were organized by El Comité Pro Reforma Migratoria Y Justicia Social and Latino Advocacy, both of which have been in regular contact with the prisoners.

It was announced that 20 prisoners who had been placed in solitary confinement in retaliation for the strike had been released to the general population. This victory happened with the help of an American Civil Liberties Union lawsuit charging violation of the prisoners’ First Amendment rights.

But five other prisoners remain in solitary. They include army veteran Hassall Moses, who was penalized for typing an appeal for a work stoppage along with the hunger strike. The prisoners demand an end to slave wages of $1 a day.

Spouses and loved ones of the prisoners spoke out against long-term imprisonment on petty charges, which keeps their families separated. José Moreno, an organizer of the hunger strike who just got out on bond, demanded that the prison be shut down.

Two weeks ago, Washington Rep. Adam Smith led a delegation into the prison to talk to the prisoners. Later, Smith criticized the prison conditions and the country’s deportation policy, but GEO and Immigration and Customs Enforcement (ICE) have changed nothing so far.

The Washington State Labor Council held a week-long women’s fast, starting March 31, to demand an end to deportations and for comprehensive immigration reform. They also held an all-day vigil at the detention center and collected funds for the prisoners’ families.

On March 23, AFL-CIO Executive Vice President Tefere Gebre, along with Washington State Labor Council President Jeff Johnson, representing 400,000 workers, visited with prisoners’ supporters as well as their family members outside the prison. After being informed of the oppressive prison conditions, the two labor representatives spoke out against them and against the policy resulting in the deportation of 2 million workers in recent years.

The strike continues because of the prisoners’ iron determination. The hunger strikers have posted an eight-page handwritten letter in which they “demand that the Federal Executive (Mr. President Barack Obama) use his presidential authority and order a total stop to the unjust deportations that are separating families, destroying homes, and bringing uncertainty, insecurity and unhappy futures to our children, our loved ones.” The detention center prisoners also have demands against the brutal conditions at the facility.

Solidarity could become a rising tide as more support actions are planned.

In Houston, a militant protest took place outside the Harris County jail in downtown Houston, where the sheriff has detained and turned over thousands to Immigration and Customs Enforcement. Houston Sheriff Adrian Garcia was a focus there because he enthusiastically uses ICE’s “287(g)” and “Secure Communities” programs to detain immigrants and criminalize people for working and supporting their families.

Speaker after speaker faced the jail and condemned Houston cops and sheriffs for taking people from their families and communities. Many are arrested for “crimes” such as not having a driver’s license, which the undocumented cannot get in Texas. Then they are turned over to Immigration and deported. One focus of the demonstration was the ongoing hunger strike at the Joe Corley Detention Facility, located 40 miles north of Houston in Conroe.

Adelina Cáceres spoke at length about the conditions her spouse is protesting and why he became one of the leaders of the hunger strike. The strike began on March 17, after the detainees were inspired by the hunger strike they saw on television being carried out in Tacoma. Their demands include stopping the deportations and the resulting separation of families, reducing the number of detainees in one cell, fixing deplorable health violations and the lack of health care, and an end to local and state police cooperation with ICE.

The spouse of Manuel Martínez Arámbula, Ernestina Martínez, and one of his daughters spoke at the April 5 rally. On April 3, Manuel Martínez Arámbula, one of the strike leaders, turned 50 years old. On his birthday his spouse and daughters, along with many supporters, held a birthday party with cake and refreshments outside of the detention center where he was being held.

In the middle of the night after the party, Martínez was deported. He has lived here in the U.S. since he was eight.

The family had spoken with Martínez, who said he is determined to come home. They emphasized on April 5 that they were determined to fight his unjust deportation. His daughter said, “I miss my father. I want him to come home so we can be a family again. This makes me very sad, but we will fight until he can come home where he belongs. His family is here.”

Chanting “Education, not deportation!” and “¡Obama, eschucha! ¡Estamos en la lucha!” (Obama, listen! We are in struggle!”) the crowd marched a block to the 287(g) office and took over the reception area. Security was alarmed as the room filled with sign-carrying protesters chanting “No justice, no peace!” and “Stop deportations!” Those who could not squeeze inside demonstrated outside.

While GEO continues to profit from the exploitation of immigrants inside Joe Corley Detention, and ICE continues to use extreme retaliation tactics, hunger strikers and the community vowed to continue exposing deportations and inhumane conditions until their demands are met.

Also on April 5, another Houston event to demand “Not 1 More Deportation” was held by the Living Hope Wheelchair Association and the Fe y Justicia Worker Center. 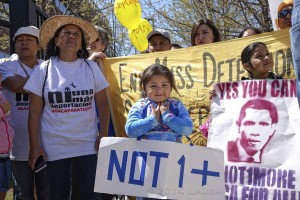 Thousands of immigrants and their allies from labor, community and faith organizations walked from the Georgia state Capitol to the Immigration and Customs Enforcement building in Atlanta, demanding an end to mass deportations. The Georgia Latino Alliance for Human Rights initiated the action, once again showing the power of its grassroots organizing.

Buses, vans and cars brought participants from north, middle and south Georgia, many adults accompanied by their small children. Colorful banners and signs all called on President Obama to act now and prevent the deportation of even one more immigrant. Bright yellow balloons were inscribed with “Stop deportations” and “Not one more.”

Once at the ICE office, the demonstrators surrounded the fence-enclosed building. After listening to the stories of families broken apart by the unjust immigration policies, hundreds of signs bearing the names of those Georgia men and women deported or being held in detention were affixed to the iron bars and the balloons released.