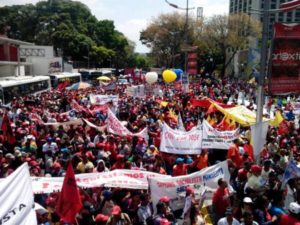 March 9 rally in Caracas in defense Venezuela and against the U.S.-backed fascist gangs.
Photo: www.nicolasmaduro.org.ve

U.S. imperialism has supported and encouraged fascist groupings opposed to the legitimate Venezuelan government of President Nicolás Maduro that are trying to topple the Bolivarian Revolution with violent demonstrations, starting Feb. 12. These are aimed not only at Venezuela but at progressive developments in the entire Latin American and Caribbean region. This assault has instead served to unite all the forces backing the Bolivarian Revolution.

It is true, as some have said, that Venezuela is divided. It is divided by the class struggle.

Anyone watching CNN or other commercial media would think that these violent actions are happening all over Venezuela. That is false. Of the 335 municipalities in the country, only nine now have these fascist-like violent acts organized by youth from the ruling class. They take hold only in the wealthy sectors, which itself shows the strength of the popular pro-government neighborhoods. The rich youth promoting the attacks would not even dare go to the poor barrios.

While the number of sites and people participating in the anti-popular attacks has decreased, the aggression has grown, leaving at least 21 people dead. President Maduro has said that 50 people have also died because ambulances can’t drive through street barricades the fascists set up.

This is the usual scenario: What starts as a supposedly “peaceful” demonstration becomes brutal as night falls. Fascist youth take over, hiding their faces behind masks. They set up “guarimbas,” roadblocks, to prevent any traffic flow. They hurl stones and Molotov bombs, set fires, throw garbage on the streets and use weapons with live ammunition.

They string barbed wire that is invisible in the dark across streets. A worker riding a motorcycle was decapitated by one while driving home. Their target is any pro-government person, the National Guard and anyone who tries to remove the barricades. The victims can be anyone.

The fascists are active where the local authorities, mayors and/or governors are from the opposition and order the local police not to stop them. The upper-class youth are instigated by right-wing leaders like Leopoldo López, who is now in jail. He and others publicly and through social media call for violence and a return to the past, when the oligarchy ruled and the majority in Venezuela lived in misery.

The government has sent in the National Guard to prevent further unrest, but with strict orders not to shoot at protesters. The fascists, in turn, try to attack them while people from high-rise apartment buildings throw cans and bottles at them.

It shows the hatred and racism of the people in these areas, who are mostly white, middle class and rich, against the National Guard, which is made up of poor Venezuelans, the majority of them people of color.

In an effort to prevent widespread violence and a bloodbath instigated by imperialism, the government has initiated a Campaign for Peace, calling for disarming all groups, both for and against the Bolivarian process.

Some in the progressive movement see the government tactic as a retreat by President Maduro from the task of deepening and defending the revolution and moving it toward a socialist path. While it certainly is a difficult tactic, the left forces in general have supported the approach while remaining vigilant, pledging to defend the revolution by any means necessary.

‘Government in the streets’

The government’s response to the fascist violence has been to mobilize the people in the streets. Maduro’s “gobierno en la calle” (government in the streets) is now both real and active. There are demonstrations supporting the government almost daily.

These demonstrations have turned into “people’s assemblies,” where both the people and the government present proposals. There have been separate demonstrations by workers from PDVSA — the national oil company — and workers from other major industries, by the elderly, the youth, women, motorcycle riders (motorizados), peasants and Indigenous people.

In addition, the government has called for a major National Conference on Peace with all the sectors. On Feb. 26, in order to initiate this effort, Maduro met with businesspeople, including the president of FEDECAMARAS — the Chamber of Commerce — which was an active participant in the April 2002 coup against then President Hugo Chávez. He also met with religious figures, governors, intellectuals, artists, sports figures and people in other sectors.

Maduro delineated four key points needed to unite for peace: respect for the Constitution, dismantling the organized violent groups, defense of Venezuela from foreign intervention and organizing a National Peace Summit. The violent and right-wing Board for Democratic Unity did not attend the meetings.

On the anniversary of Hugo Chávez’s death, March 5, an impressive civic-military parade took place in Caracas. It was a moving display of the popular forces determined to defend the Bolivarian Revolution. It stressed the idea of unity between the organized people and the armed forces, which are aligned to the process, in defense of the revolution.

In case there was any doubt that the government is preparing to repel any foreign intervention, the parade proudly displayed new armaments, planes and tanks bought in recent years.

U.S. imperialism keeps up the pressure

Washington is continuing its insolent imperialist attempts at intervention. Just days before the anniversary of Chávez’s death, the U.S. House of Representatives approved a bipartisan law against Venezuela, authored by none other than anti-Cuban right-winger Rep. Ileana Ros-Lehtinen. President Barack Obama and Secretary of State John Kerry continue — without any evidence, as there is none — to accuse President Maduro of carrying out violent repression, while ignoring the criminal actions of the fascists, whom they call “peaceful protesters.”

U.S. imperialism also recruited the Panamanian regime to force an intervention by the Organization of American States. As a result, Maduro broke all relations with Panama, expelling the ambassador.

The imperialist ploy boomeranged. When the OAS voted 29-3 on March 7, it was a public slap in the face to U.S. imperialism. The OAS Permanent Council approved a Declaration on the Situation in Venezuela entitled “Solidarity and Support for Democratic Institutions, Dialogue and Peace in the Bolivarian Republic of Venezuela.”

Refusing to intervene, the OAS instead gave full support to the Bolivarian government and its efforts to bring peace. Only the U.S., Canada and Panama voted against this declaration. n