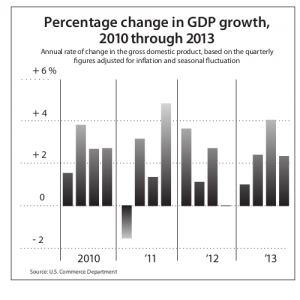 Here is a major headline item that never made it to the headlines: The Commerce Department has revised downward by 25 percent its estimate for the growth of the U.S. economy in the last quarter of 2013.

This is a huge downward revision. What was originally announced as a 3.2 percent growth rate, on an annual basis, was dropped to 2.4 percent. The original 3.2 percent was anemic as far as creating new jobs for workers is concerned. But 2.4 percent is even worse.

When there is an upward revision in such numbers, it usually makes the front pages. But this number was hidden deep in the back pages of the New York Times (“All the news that’s fit to print”). And the article that announced this major setback to the capitalist economy was quickly taken off the front page of the Times website hours after it appeared in print.

The big business economists and the capitalists themselves consider this a blow to their hopes that the economy will finally reach “breakout speed” after four years of disappointment. While for the bosses this means some lost profits, for the workers and the labor movement this revision downward is a statistical measure of mass suffering.

Marxist analysis shows that under capitalism, in order to have jobs, workers must be able to sell their labor power to some boss so that boss can exploit them and make a profit off their labor.

But in times of mass unemployment, the capitalists need to expand at an energetic rate if they are to create jobs for the millions of workers who are unemployed. This problem is particularly bad now because technology — computers, software, robots, etc. — has enabled the capitalists to produce with fewer workers at lower and lower wages.

So the crisis of long-term mass unemployment, which hit in 2008 and has never really gone away, cannot be eased unless capitalism, and the bosses’ need for labor, expands at a huge rate.

That is exactly the opposite of what is happening in this dead-end stage of capitalism. The accompanying graph shows the picture of U.S. capitalism trying to lift itself off the ground and “break out” over a four-year period. Each time economic (gross domestic product) growth begins to rise, it falls back again because capitalist overproduction — that is, producing more than the masses can afford to consume — forces it back down.

What this means for the workers is a crisis of unemployment and underemployment, as indicated by two studies from the Economic Policy Institute, a liberal think tank that studies the economic situation as it affects workers.

It is a widely known fact that as the official unemployment rate has gone down, actual unemployment has stayed the same or gone up. The reason is that workers who drop out of the work force are no longer being counted. And more and more workers are dropping out of the labor market.

The EPI has tried to arrive at numbers that illustrate this phenomenon by developing “missing workers” estimates. (epi.org, Feb. 20) According to these estimates, at the beginning of 2014 the official unemployment rate of 6.6 percent was off by almost double.

EPI estimated that in the beginning of 2014 there were 5,850,000 “missing workers” — workers who would take a job if they could find one but have given up looking or have never entered the labor force in the first place. If those workers were counted, the unemployment rate would be 10 percent, not 6.6 percent. And the number of missing workers has been rising steadily from 2008 to the present without any significant decline.

Heidi Shierholz of EPI did another study about “missing jobs.” She showed that the rate of job growth is so slow that the capitalist economy is now missing 7.9 million jobs that would be needed just to get back to the level where unemployment was before the financial crisis and the economic collapse in 2008.

Shierholz arrived at this number by showing that the economy still has 1.3 million fewer jobs than it had in 2008 when the crisis began. In addition, over the six and a half years since the crisis began, 6.6 million new workers have entered the labor force. This leaves a total of 7.9 million jobs needed just to get back to the so-called “normal” condition (pre-2008) of 4.2 percent unemployment.

This is also an admission that 6 million or 7 million unemployed workers is “normal” under “healthy” capitalism. That may be healthy for the bosses, but it is a plague for the workers.

In short, the headline about the downward revision of capitalist economic growth should have read something like this: “Capitalism fails; workers face deeper crisis.” This is the reality that the multinational working class and all its labor and community organizations should begin to fight to turn around.

Fred Goldstein is the author of “Low-Wage Capitalism” and “Capitalism at a Dead End,” which has been translated into Spanish as “El capitalismo en un callejón sin salida.” Both are available on Amazon.