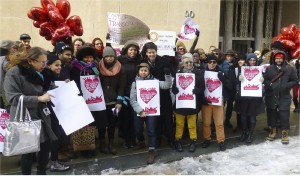 Chanting “Transphobia is bad medicine,” dozens of transgender activists and allies rallied on Valentine’s Day outside the offices of the New York state Department of Health in lower Manhattan.

As they hoisted red balloons and signs asking, “Where’s the love, Shah?” protesters called for comprehensive, safe and affordable Medicaid for all New Yorkers.

The action was called by the Sylvia Rivera Law Project and TransJustice of the ­Audre Lorde Project. Learn more about the campaign and sign the online petition at srlp.org/healthcare.