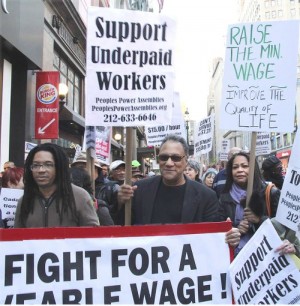 A New York City rally on Oct. 24 commemorated the 75th anniversary of the minimum wage law’s passage and called for increasing it to at least $15 an hour. A city public sector union speaker stressed that U.S. law does not recognize minimum wage rights for people with disabilities. They don’t receive equal pay for equal work.

Section 14c of the Fair Labor Standards Act of 1938, which established the federal minimum wage, allows certain entities holding “special wage certificates” to pay their workers with disabilities less than that mandated by the law. These segregated workplaces or “sheltered workshops” employ workers with various physical or developmental disabilities.

Federal law requires that certain goods and services procured by the government be purchased from these “sheltered workshops” in order to employ workers with disabilities, but they do not have the same protections that other U.S. workers have.

The National Federation of the Blind says that more than 300,000 workers with disabilities are not paid the federal minimum wage. The organization says that many employers are profiting off the labor of workers with disabilities and often receive lucrative federal contracts, so there is no reason to pay anyone less than the minimum wage, regardless of their abilities.

NBC News and Watchdog.org say Goodwill has recently paid some workers as little as 22 cents an hour. Today’s federal minimum wage of $7.25 an hour is 33 times what some Goodwill workers receive. By exploiting people with disabilities, company profits have funded CEO salaries totaling $30 million at 150 Goodwill franchises.

On Oct. 31, the Autistic Self Advocacy Network and NFB representatives delivered a petition with 170,000 signers to Goodwill Industries’ Maryland headquarters and picketed outside. The petition demanded that the company stop paying its workers with disabilities less than the minimum wage.

“Goodwill should step out of the 1930s and adopt a business model that provides real training and opportunities for workers with disabilities to earn the federal minimum wage or higher,” said Anil Lewis, NFB policy and advocacy director. (Truthout.org, Nov. 1)

“Many of these sheltered workshops could be more accurately described as prisons, albeit without bars, than as actual workplaces,” Lewis explains. “Fewer than 5 percent of the prisoners escape. … 95 percent of the people currently toiling in subminimum-wage work will spend their entire working lives in these facilities. They will never receive the needed services, training, or support to become real workers, doing real jobs, and earning real wages.”

Groups, including the NFB, are rallying support for The Fair Wages for Workers with Disabilities Act of 2013 (H.R. 831), which was introduced in Congress this year. If passed, it would repeal Section 14(c) of the FLSA and phase out the discriminatory practice of paying workers with disabilities less than the federal minimum wage. Unfortunately, despite NFB’s efforts, Congress has not approved similar proposed laws in previous years.

In May 2013, the Equal Employment Opportunity Commission won a $240 million judgment against one “sheltered workshop,” the turkey processing company Hill Country Farms, not because the company’s workers with intellectual disabilities were paid only $2 a day, but because they were severely physically and emotionally abused by their bosses and suffered from diabetes, hypertension and other illnesses.

People with disabilities need the solidarity of people without disabilities to help us send the discriminatory provisions of the minimum wage laws into the dustbin of history.