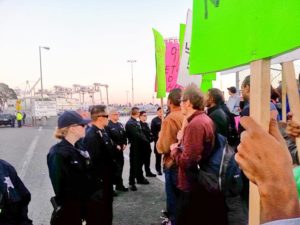 Oakland, Calif. — For the second time in three months, truckers at the Port of Oakland protested against their oppressive working conditions and heavy financial burdens by shutting down the port on Oct. 21. With the support of community members, they picketed the terminals of SSA, Ports America and TraPak.

As independent contractors, port truckers cannot join or form a traditional union to bargain, but as conditions continue to deteriorate at the port, they have organized themselves into the Port of Oakland Truckers Association (POTA).

According to their press release: “In 10 years, the pay per cargo load has not increased, while the cost of diesel has more than quadrupled and costs for truck maintenance have skyrocketed. Despite the long list of grievances the truckers have, which include unsafe working conditions, verbal abuse from terminal employees, a single men’s restroom for all truckers to use, and daily hours of unpaid time spent waiting for a load, they are only asking for four things from the Port of Oakland and terminal owners. POTA’s demands are simple: a green emissions fee, $50 paid to truckers per load to offset the cost of upgrading trucks to new green emissions standards; an extension for compliance with new environmental standards that will go into effect for owner-operators on Jan. 1, 2014; a congestion fee of $50 per hour, paid after the first two hours, to compensate truckers for hours, currently unpaid, spent waiting for a cargo load; and an increase in pay per cargo load.”

Police forced the pickets to the curb during both the day and night shifts. Community supporters of the truckers were incensed when Oakland police officer, Miguel Masso, appeared in the police lines. Masso had shot and killed Alan Blueford, a Black youth whose death led to many protests and demands for the cop’s firing and prosecution. The crowd charged at Masso, screaming “Killer! Baby killer!” He was forced to leave the line within minutes of his appearance.

Truckers ‘sick of their lies’

Workers World talked to Frank Adams, spokesperson for the POTA. Adams, who has a wife and three children, has been a trucker at the Port of Oakland for the last eight years. He joined the POTA after participating in a port shutdown in August. Adams told us: “Chris Lytle, port executive director, said he would start a task force to help with our problems, including himself, his assistant and company owners, and ILWU Local 10. Nothing came out of the task force but a lot of talk. We met a lot of people, but our demands weren’t met.”

Adams exclaimed: “We’re getting sick of all the lies for three months. We gave them a date that we wanted something done — Oct. 18 — or we would protest. The truckers of Oakland voted on that. When they gave us their answer on Oct. 16, they straight up said, ‘No, it’s not gonna happen, you’re not getting an extension, you’re not getting a green emissions fee, or congestion fee, get over it and move on.’”

Jorge Esparza, another trucker who participated in the protest, has been at the port for the last eight years and is raising four children: one a college graduate, one in college and two younger ones. He told Workers World that truckers must bring in $5,000 per month just to break even, between paying on original loans on trucks, additional loans for the emissions upgrades required a few years ago, $2,500 per month for diesel, and regular maintenance expenses.

Esparza said: “I’m a compliant driver, have a new truck, but I want to be there for all those 800 families who don’t have a voice. There are families who have special needs kids, but after Christmas they will be out of a job. The port kidnaps me for seven hours a day. Some of the terminal operators don’t believe in good service. That’s the main problem. I want to be able to go in and out with lines ­moving fast.”

He continued: “Let’s say I have a box from Friday. Tomorrow I go to Martinez. It takes an hour and a half. I bring it back to the port, then get in another line to get an empty box to load, sometimes takes one and a half hours just to get to the speaker to tell them what I want to do. We have customers we need to serve. We’re not trying to get rich, but would like to get our fair compensation. Many of the truckers have three or more kids.”

Adams said of the POTA: “Our membership, now in the hundreds, has tripled and is growing strongly every month. We represent owner-operators at the Port of Oakland. The port closure on Monday, Oct. 21, and work stoppage from the truck drivers on Tuesday, reduced the terminals down to 5 percent of capacity, except for the long-haul guys, who were taken by surprise.”

Since the shutdown, the POTA has gotten the attention of the terminal operators and Oakland Mayor Jean Quan. Describing a meeting that included Quan and Lytle, Adams said: “We enlightened Mayor Quan to our plight. She acted surprised about what we need and aren’t getting. She was confused about why Oakland wasn’t getting what the Port of Long Beach gets. It didn’t seem fair. Quan instructed Lytle and the deputy mayor to discuss why.

“Our main concern with Quan was to get the extension. We had asked [the California Air Resources Board] to come to the meeting. She said she would get CARB and state legislators to come to the meeting to try to get the extension and money. She asked for up to a week and a half and requested no further work stoppages while this was in process. The truckers voted to give her that week and a half. We also requested that they remove an injunction/restraining order against our two members [from the ­August ­protest].

“We’re organizing and strategizing for future actions. Reaching out to the community for awareness, we’ve done interviews with the media, and are having a Truckers’ Solidarity Picnic next Saturday [Nov. 2] at 2 p.m. at Middle Harbor Park. We have started a Port of Oakland Truckers Association Support and Strike Fund to help with expenses.” (See wepay.com/donations/port-of-oakland-­supportstrike-fund.)

Adams added: “We have a very dangerous job. Safety is our top priority, and being such a congested port puts everyone at risk. More ILWU workers and truck drivers die every year than police officers. We’re representing the truck drivers. We don’t make the decisions. We take that back to our members. They’re the ones who vote on the next course of action. We take what they want to the table. Whatever Mayor Quan or the Port of Oakland says to us, we take that back for a decision. We would appreciate the support of the International Longshore and Warehouse Union.”