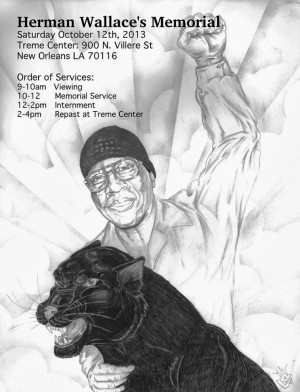 New Orleans — Amid tears as well as laughter, family, friends, comrades and former Black Panthers at the Tremé Community Center on Oct. 12 shared treasured vignettes from the times they shared with Angola 3 member Herman Wallace during his long and tortuous 42 years in solitary confinement at the notorious Angola Prison.

Wallace died of cancer on Oct. 4, surrounded by family and friends, just three days after being released from prison. His last words to them were “I am free. I am free.”

The Tremé gymnasium was packed with people who came from all over New Orleans and Baton Rouge, La.; Houston and Austin, Texas; New York; and other cities from coast to coast. Poetry, song and words echoed the sentiment of those who knew and loved Wallace, those who admired him and his tenaciousness — which survived in the face of the cruelest prison treatment at the Louisiana State Penitentiary. It was formerly an 18,0000-acre slave plantation.

Wallace was sent to Angola for a robbery in the early 1970s where he and fellow prisoner Albert Woodfox formed a chapter of the Black Panther Party. After a guard was killed in a prison rebellion in 1972, Wallace, Woodfox and Robert King were charged with his murder, despite lack of any evidence.

The three men, who became known as the Angola 3, had supporters throughout the world. Wallace, Woodfox and King were imprisoned in  solitary confinement until King was released in 2001 and Wallace was let out on Oct. 1. Woodfox is still in solitary and is fighting ongoing torture.

The memorial was chaired by Parnell Herbert, a childhood friend of Woodfox’s, who wrote and is producing his play about the case of the Angola 3. “Herman was such a special person, always true to his beliefs based in the Black Panther Party,” he commented.

Friends and family members spoke, including Victory Wallace, Herman’s  sister, who said that she had brought the ashes of her other brother “so he and Herman could be buried together.”

A statement from Woodfox was read: “I had a chance to say goodbye to my comrade in the struggle, my mentor in life, my fellow Panther and most of all, my friend. Herman taught me that a man can stumble, even fall, as long as he gets up. That it’s OK to be afraid, but hold onto your courage.

“To lose a battle is not the loss of a war. Herman Wallace’s greatest pride was joining the Black Panther Party for Self Defense. He believed in duty, honor and dedication. He never broke the faith of the party, his comrades or the people. As I bent to kiss his forehead, my heart said goodbye — I love you forever. My soul said separated but never apart, never touching, but always connected. He was the best of us. As long as we remember him, he lives on. All Power to the People!”

After the memorial and burial, hundreds of people sat down together to eat delicious Louisiana food, exchange stories about their visits with Wallace, and listen to moving tributes in words, poetry and song. His large, loving family, wearing T-shirts imprinted with a tribute to Herman Wallace, was comforted by the outpouring of love from the youngest child to the oldest adult.

There will be a traditional second-line parade in honor of Herman in New Orleans on Oct. 19 at 2 P.M., starting at St. Augustine Catholic Church, which is at 1210 Governor Nicholls St. It will conclude at the Louisiana Supreme Court at 400 Royal St.