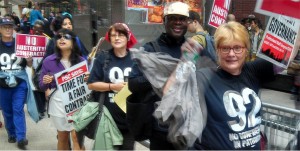 Two hundred Professional Staff Congress members protested at the City University of New York Board of Trustees meeting at Baruch College on Sept. 30. A number of faculty and staff went inside the meeting, while others, plus some students, held a picket line outside.

The six students from the Ad Hoc Committee Against the Militarization of CUNY who were arrested by police on Sept. 17 came to the rally in solidarity with the union. They spoke about their case, in which police physically assaulted them at a demonstration against war criminal Gen. David Petraeus teaching at CUNY’s honors college. Union leaders repeated the union’s defense of the right of peaceful protest at CUNY without fear of police violence. n