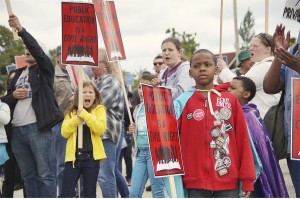 Several hundred teachers, students, the Wisconsin AFL-CIO and other unions and community organizers marched Sept. 21 from the Milwaukee School of the Arts in downtown Milwaukee across the James E. Groppi Unity Bridge to the Forest Home Avenue School on the southside of Milwaukee. Their signs read in English and Spanish, “Public Education is a Right,” “No privatization” and “No Take Over.”

Students walked with large puppets and other art that they had made highlighting a quality public education. There was also a brightly dressed band playing union tunes.

Stocks called on those teachers, parents and students present to fight back against Gov. Scott Walker and the Metropolitan Milwaukee Association of Commerce efforts to privatize the schools through the MMAC’s idea of a “recovery school district,” which would take so-called low-performing public schools and privatize them. He denounced similar efforts that occurred in New Orleans after Hurricane Katrina and are being proposed in Detroit and other districts. He described Milwaukee as “ground zero” for the privatization effort. And he called on everyone there to fight back against the governor’s efforts at privatization, saying “our beloved public education system is in jeopardy.”

Other organizations present included Parents for Public Schools, Women Committed to an Informed Community, the Wisconsin Alliance of Excellent Schools, WI Bail Out the People, and teachers’ unions from Milwaukee, Racine, Madison and surrounding communities.