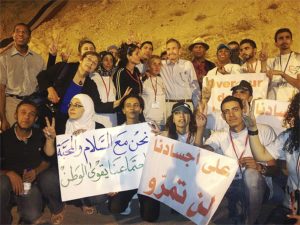 Anti-war delegation from U.S. meet with Syrian youth at their ‘Over Our Dead Bodies’ encampment on Mount Qasioun outside Damascus These youth have pledged to resist any imperialist attack on Syria. U.S. delegates are Ramsey Clark, Cynthia McKinney, John Parker, Sara Flounders, Dedon Kamathi and Johnny Achi.

A delegation of anti-war and human-rights activists from the United States entered Syria Sept. 16 on a fact-finding and people-to-people solidarity trip. The participants plan to counter the ubiquitous pro-war propaganda spread in the U.S. and NATO imperialist countries and former colonial powers that demonizes the Syrian government.

Delegation members have played a big role organizing anti-war actions in the United States since the U.S. began threatening Syria during the last week of August. They intend to use their experience in Syria to strengthen their anti-war organizing among the U.S. population, which is overwhelmingly opposed to U.S. military action against Syria.

IAC co-coordinator Flounders told Workers World that since the U.S. continues to threaten Syria with rocket and bomb attack and since Secretary of State John Kerry has said it is still the U.S. strategic plan to remove Syrian President Bashar al-Assad from power, even if all Syrian chemical weapons are destroyed, “It is vitally important to bring the truth about the Syrian situation back to the people of the United States.”

Flounders said the delegation is in Syria “to bring back reports after talking with and meeting with some of the more than 4 million people displaced by the war. This is a war the U.S. government has funded and provoked. We aim to see some of the enormous damage created by this war. We also want to see how the Syrian people have mobilized to resist the war and carry out their everyday life, including providing health care.”

Participants at the forum, beside the delegation, included anti-war leader and Member of Parliament George Galloway from Britain; ambassadors of Syria, Russia, Lebanon, Palestine and Nicaragua; and many leading organizations from Europe, North Africa and Western Asia. Some of the other organizations sending representatives from the U.S. were the International Anti-imperialist Coordinating Committee, the Answer Coalition and the United National Antiwar Coalition, as well as the IAC.