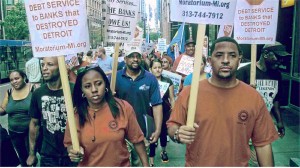 On Aug.19, the largest turnout yet protested Detroit’s bankruptcy proceedings. More than 200 retirees and their supporters protested outside the federal courthouse for hours while motions were being presented inside to Federal Bankruptcy Judge Steven Rhodes.

American Federation of State, County and Municipal Employees Union—Council 25 called the demonstration and the rank-and-file group, Stop Theft of Our Pensions Committee (STOPC), gave it strong support. Retirees — some in wheelchairs or with walkers or canes — represented former bus drivers, clerks, police and water department employees, and other positions.

Signs and chants demanded, “Hands off our pensions! Make the banks pay!” and “Stop debt service to the banks that destroyed Detroit!” It was clear to all that the bankruptcy filing was designed to pay off the banks by gutting pensions, city jobs and city services. A giant banner proclaimed, “Cancel Detroit’s debt — the banks owe us!”

On Aug. 16, attorney Jerome Goldberg filed an objection — on behalf of David Sole, a STOPC organizer — to the city of Detroit’s motion that would exempt a large part of Detroit’s debt from the bankruptcy judge’s scrutiny. Emergency Manager Kevyn Orr had entered into a “Forbearance Agreement” with some large banks on July 15.

The objection states: “The Interest Rate Swaps on Pension Obligation Certificates entered into by the City of Detroit with UBS and SBS/Bank of America constitute a drain of hundreds of millions of dollars to the banks from the City’s budget with nothing positive for the City in return. Basically, the Interest Rate Swaps obligate the City of Detroit to pay UBS and Bank of America 6.323% interest on $800 million in bonds, when the actual rate on the bonds is only 0.6056%.”

The objection continues: “The banks, who … presented this ‘deal’ as a beneficial one for the City, pocket the difference between the interest paid to them and the actual interest rate on the bonds, as clear profit, amounting to at least $45.1 million a year [states] … Orr’s May 12, 2013 Financial and Operating Report or $160 million since 2009.”

Sole admits that no proof exists now of fraud or improper actions, but tells the judge: “It must be noted that recently executives from UBS’s municipal bond division were sentenced to prison terms for their activities in connection with the municipal bond market. A former Bank of America executive was also indicted for participating in a conspiracy to defraud municipal bond investments.

“Both [BOA] and UBS have been implicated in the Libor scandal, which potentially affects the amounts the City of Detroit actually should have been paying on the bonds and swaps, as well as the ‘ISDA fix’ which potentially affects the calculations for termination fees associated with the Interest Rate Swaps. … [B]oth [BOA] and UBS, as documented in countless lawsuits and consent judgments with the federal government and state governments including Michigan, were major subprime lenders and participants in the illicit mortgage activity that precipitated a virtual financial collapse in 2008, and that especially implicated cities with large African-American populations like Detroit.”

Furthermore, “The financial crisis that precipitated this Chapter 9 bankruptcy filing was [largely] a result of the effects of predatory lending by the banks against the residents of Detroit, which resulted in tens of thousands of foreclosures, … a massive population decline and a precipitous decline in property values.”

In a further attempt to expose big banks’ criminality, STOPC retirees asked Michigan’s Sen. Carl Levin to help get the Securities and Exchange Commission to intervene in the Detroit bankruptcy proceedings. Bankruptcy law gives the SEC authority to appear in any bankruptcy. Levin’s U.S. Senate Investigations Subcommittee issued the Levin-Coburn Report on April 13, 2011, which was a scathing attack on banks for their criminal actions.

On Aug. 20, the bankruptcy court trustee reviewed 100 retirees’ applications to participate in a court-authorized “Retirees Committee” to represent more than 20,000 retirees in these proceedings. This further eliminates the people of Michigan’s democratic rights. The Emergency Manager was imposed immediately after voters overturned an Emergency Manager law in the November elections. Now a group of retirees, handpicked by the trustee, will be facing the banks and the court, which will pressure them to give up the workers’ hard-won pensions.

Detroit’s Moratorium NOW! Coalition’s national call invites all banks’ victims to come to Detroit on Oct. 5 and 6 for an International People’s Assembly Against the Banks and Against Austerity. An Aug. 14 planning meeting attracted 50 groups and individuals. Organizers say the attack on Detroit — and especially on workers’ pensions — is a test case and that if successful, will spread across the country. (moratorium-mi.org)