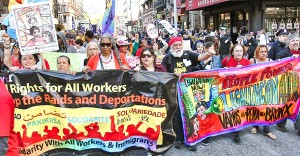 While many powerful economic and political issues are currently driving immigration policy in this country, an outstanding one is racism.

In 2004, Harvard historian Samuel Huntington wrote a racist call to arms against immigrants in the magazine Foreign Policy. He wrote that Latino/a immigration “threatens to divide the United States into two peoples, two cultures, and two languages. Unlike past immigrant groups, Mexicans and other Latinos have not assimilated into mainstream U.S. culture. … The United States ignores this challenge at its peril.” (March 1)

The challenge was not ignored.

Since 2005, there has been a vigorous, ugly and racist campaign against immigrant workers, especially the undocumented. Driven by the current economic crisis, which has reduced the bosses’ demand for cheap and vulnerable labor, this campaign is meant to drive immigrants further underground, exploiting them even more, and incarcerating and deporting the rest.

It is also meant to divide the working class in this country.

Just as the exoneration of Trayvon Martin’s killer, George Zimmerman, was meant by the powers that be to incite division and send a message that the lives of youth of color mean nothing in this society, immigration policy is also meant to incite divisions as well as to dehumanize and criminalize workers of color.

The current anti-immigrant campaign is meant to pit one sector of the working class against another. Workers are supposed to blame each other for unemployment and fight each other instead of the real enemy: the multinational corporations, the billionaires and the government that does their bidding.

This onslaught took hold in ground zero for racism, the state of Arizona. As we commemorate the historic March on Washington 50 years ago, it is important to recall that Arizona racists did everything in their power to prevent making the birthday of the Rev. Dr. Martin Luther King Jr. a holiday. They did not prevail, but Arizona was one of the last states to adopt the holiday.

No militarization of the border!

SB 774, the Border Security, Economic Opportunity and Immigration Modernization Act — which was passed by the Senate in June and is awaiting passage in the House of Representatives — is counter to what immigrants and their advocates have been struggling for since 2006.

Many in the immigrant rights movement have pointed out that U.S. foreign policy is the principal force driving migration. Whether it is trade policies with Mexico such as the North American Free Trade Agreement or the U.S.-orchestrated kidnapping of President Jean-Bertrand Aristide of Haiti, most migrants come to the U.S. because of unbearable conditions at home created mainly by neocolonial U.S. policies.

The current immigration law about to be passed by Congress completely ignores this.

Instead, it will spend more money for militarization of the border, more repression, more racism and the violent expulsion of workers whose only crime is survival. Only a small percentage of the more than 11 million undocumented stand a chance of becoming legalized.

Almost 2 million workers have been deported from the U.S. since the 2008 election. That would be as if the entire city of Dallas disappeared in one stroke.

Behind these deportations are the powerful interests of the racist, war­mongering, ruling elite. Powerful lobbyists for military contracts and for racist, anti-poor private contractors like the Corrections Corporation of America are behind this enforcement-first immigration policy.

The alternative — legalization of the more than 11 million undocumented in the U.S. — would not only mean well-earned justice for immigrants but would raise the living conditions for all workers in this country.

As the union adage explains, “An injury to one is an injury to all.” Conversely, a rising tide lifts all boats.

Right-wing forces like the Tea Party and prominent Republicans have made immigration a hot button issue. Despite their liberal posturing, powerful Democrats like Sen. Chuck Schumer from New York are not that far behind. In fact, immigrant rights activists in April targeted Schumer’s office, charging he gets financial backing from CCA and other companies that profit from the prison-industrial complex. (politics365.com)

Since 2005, racist, inflammatory rhetoric and anti-worker, anti-poor legislation have swept the country.

All kinds of atrocities have occurred. Many immigrant women have had their children taken from them and put up for adoption by U.S. families, never to see them again. In 2011, “at least 5,100 children currently living in foster care [were] prevented from uniting with their detained or deported parents.” (arc.org/shatteredfamilies)

Several immigrants have died in detention centers after their health crises were ignored.

Recently, Rep. Steven King of Iowa, a member of the House Subcommittee on Immigration and Border Security, told an interviewer, “For every [immigrant] who’s a valedictorian, there’s another 100 out there that weigh 130 pounds and they’ve got calves the size of cantaloupes because they’re hauling 75 pounds of marijuana across the desert.” (huffingtonpost.com, July 23)

Immigrants weren’t intimidated by this atrocious statement. They protested, saying, “I don’t have calves the size of cantaloupes, King!”

Other atrocities are hidden from the public. More than 13,000 unaccompanied Mexican minors were deported in 2012. Immigrant advocates report that it is not uncommon at deportation court hearings for a toddler or a 6-year-old to appear in front of a judge without a lawyer. In 2012, immigration agents apprehended 6,548 accompanied minors and 24,481 unaccompanied children. ­(alternet.org, July 29)

In unity there is strength

The capitalist class in this country has created extreme conditions for workers today, with persistent unemployment, homelessness, inadequate education and health care. How can the richest country in the world with billions of dollars at its disposal not provide basic needs for the people?

The political agenda is driven by a capitalist system that requires ever more profits for the rich, and the hell with the rest of us.

Class peace for the 1% depends on the age-old tools of fear and bigotry. Imagine if all the families and friends of the incarcerated united with all those who have experienced massive deportations. What a powerful tool that would be.

The day is coming when the people of this country — of all nationalities, no matter whether they were born in Brooklyn or Manila, Somalia or San Francisco, Manhattan or Mexico City — will unite to fight for the interests of the working class.