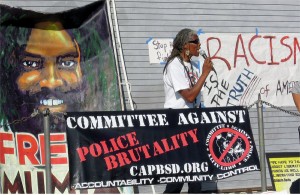 The July 13 “not guilty” verdict for George Zimmerman in the killing of 17-year-old Trayvon Martin in Sanford, Fla., generated a massive outpouring of anger and disgust all over the U.S., especially on the day after the verdict. One such protest was held in San Diego, Calif., on July 14, where at least 1,000 people attended a rally organized by the Committee Against Police Brutality. The response to this racist verdict is forging unity among many struggles for social justice. For instance, Gloria Verdieu, pictured here, represented the Free Mumia Abu-Jamal Coalition and the International Action Center at the San Diego rally.