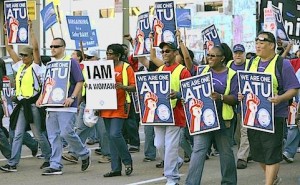 Oakland, Calif., Aug. 4 — Gov. Jerry Brown intervened at the 11th hour and called for an investigation into the Bay Area Rapid Transit agency’s negotiations with the BART workers, narrowly averting a strike which would have started on the morning of Aug. 5. According to today’s San Francisco Chronicle, this means there can be no strike for the next seven days.

More than 1,000 workers and community members rallied and marched in downtown Oakland on Aug. 1 to show support for the BART workers, whose 30-day, state-brokered temporary work agreement expires at midnight tonight. The workers had walked out for four-and-a-half days beginning July 1 when their contract expired.

BART management has launched an aggressive media campaign, trying to turn the public against the 2,600 workers. The workers haven’t had a raise since they took major concessions in 2009, saving the transportation agency $100 million. BART officials claim they would have to raise fares by 18 percent over three years to pay for workers’ raises and to maintain their current level of benefits. However, BART is seeing record ridership, averaging 400,000 riders on weekdays, and has projected a $125 million-a-year surplus for the next 10 years. (SF Chronicle, July 30)

The Aug. 1 rally was called by Amalgamated Transit Union Locals 1555 and 192, Service Employees Local 1021, American Federation of State, County and Municipal Employees Local 3993, and International Longshore Warehouse Union Local 10. It was endorsed by both the San Francisco and the Alameda Central Labor Councils.

Speakers included Danny Glover, a Screen Actors Guild member who has a long history of being a champion of labor and anti-racist and anti-war struggles; Clarence Thomas, ILWU Local 10 past secretary-treasurer and co-chair of the Million Workers March; Jeralynn Blueford, mother of Alan Blueford, who was killed by Oakland police last year; Chris Finn, recording secretary of ATU 1555; and Robbie Donohoe, member of IBEW and Fight for $15 organizer.

Enthusiastic marchers headed to the BART headquarters, where they militantly converged against the large plate-glass entryway. They shouted slogans against the notorious Thomas Hock, who BART executives paid $399,000 to bring in as their chief negotiator. A Veolia Transportation vice president, Hock has a record of provoking transit strikes in cities across the country.

According to the rally’s press release, organizers hoped the event would “help turn the tide on the austerity assault that has led not only to attacks on labor, jobs, and pay, but also to essential public programs like public education, Medicare, Social Security, housing, and transit needed by all of us whether we are employed, unemployed, or underemployed.”