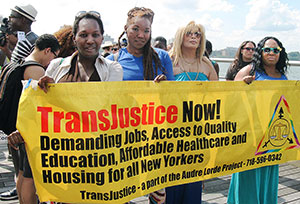 Trans Day of Action in New York on June 28.

The 9th Annual Trans Day of Action took place in New York City on June 28, called by TransJustice, a political group created by and for trans and gender non-conforming people of color (TGNC POC). Endorsed by more than 100 organizations, the rally and march, which began at the Christopher Street Piers, celebrated the long history of political activism of trans and gender non-conforming people and also addressed the growing poverty and rise of anti-trans bashings, especially toward women.

More than 600 people came out on a blistering hot day for the midday rally, where they were greeted by Elliott Fukui, TransJustice coordinator, and Imani Henry, a TransJustice founding member. The groups represented on the program included Streetwise and Safe, Audre Lorde Project, FIERCE, TransLatina, Make the Road New York and the Sylvia Rivera Law Project. All remarks were translated into Spanish and English.

Imani Henry told Workers World, “People have been conditioned to think of trans people as only being concerned about our own rights or bodies. That Trans Day of Action is a pro-immigrant rights, anti-war march calling for access to jobs, housing, health care and education for all New Yorkers is significant.”

The march through Greenwich Village was very spirited and militant, withchants of “What do we want? TransJustice! When do we want it? Now!” and “Racist, sexist, anti-gay, NYPD go away!”

The marchers went past the Stonewall Inn, site of the 1969 Stonewall Rebellion which was led by trans youth of color who battled police violence for several days. This uprising helped to usher in the modern-day LGBTQ liberation movement, including the annual Pride marches around the country.

Go to workers.org to read the 10 points of unity of TransJustice, which include an end to the U.S. “war on terror” and the prison-industrial complex as well as full legalization of all immigrants.