By Kris Hamel and Jerry Goldberg 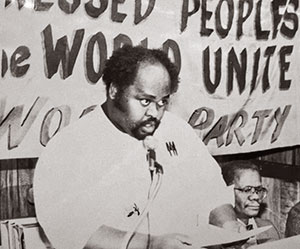 Kevin Carey, a revolutionary activist and member of the Detroit branch of Workers World Party for over 30 years, died June 10 at the age of 57. He succumbed to complications from diabetes, hypertension, heart disease and other maladies that the poorest and most oppressed in this society are subject to disproportionately.

Kevin was a graduate of Wayne State University and did postgraduate studies at the University of Michigan Dearborn and the University of Detroit. He worked as a substitute teacher in the Detroit Public Schools until his position was eliminated in the cutbacks imposed by the emergency manager.

Despite years living in poverty and struggling to survive, Kevin was a dedicated activist his entire life, fighting for the rights of the working class and especially the African-American community. He was proud of his family background and that his father was one of the first African-American doctors in the city. Kevin talked often of how his family rooted him in African-American history and Pan-Africanism.

Comrade Kevin joined Workers World Party in Detroit in the early 1980s, and was a stalwart defender of the Party and of the fight for socialism and communism. His solidarity with all the world’s workers and oppressed was strong and solid. As an African-American man in the heartland of imperialism, Kevin knew first-hand the oppression and horrors visited upon the most oppressed in this rotten system.

In the 1980s, Kevin was a staunch supporter of the struggles for national liberation in southern Africa. He was chair of the Southern Africa Freedom Committee in Detroit, which had a campaign that widened solidarity with these struggles.  For example, the committee made ribbons, T-shirts and buttons that raised thousands of dollars for the then liberation group, the African National Congress, and its imprisoned leader, Nelson Mandela, as well as for the South West Africa People’s Organization in Namibia. At that time, very few people in the U.S. even knew the name “Nelson Mandela.”

In the 1990s, Kevin represented Workers World Party in the elections in Michigan on several occasions. He ran revolutionary campaigns, speaking to the workers, students and oppressed communities as a candidate for the State Board of Education, for state representative and for Wayne State University Board of Governors.

In the 21st century, Kevin was an advocate for prisoners’ rights and helped many incarcerated inmates find legal representation to fight racist frame-ups. During the last several years, he was an organizer and the executive director of the Detroit People’s Task Force, a group which exposed gross misconduct harmful to defendants, at the Detroit Crime Lab.  He helped organize many community forums and protests on behalf of the Task Force.

Through his work on the task force, Kevin affected the lives of many people, helping incarcerated individuals and their families obtain legal representation to challenge unjust convictions. He spent hours responding to letters from inmates, who are so often ignored in this racist system. He often visited prisoners and received an award as recognition for his activities on behalf of prisoners.

Kevin participated in the March on Wall Street South outside the Democratic convention last September in Charlotte, N.C., despite his poor health. Although he was hospitalized several times in recent months, Kevin was protesting the Detroit emergency manager and demanding a moratorium on debt payments to the banks just a few days before his death.

Kevin was a voracious reader, especially of African-American history. His idols included Paul Robeson and W.E.B. Dubois, whom he spoke of often. He was a defender of all the oppressed, including women and the lesbian, gay, bisexual, transgender and queer communities.

Kevin was also a kind and gentle man. He had a good sense of humor. He loved movies and even wrote a script several years ago. He was a good athlete as a young man, and a sports fan all of his days. He had many friends and cohorts in the Detroit area. His special friend in his last years was Kimberly Greene.

He is survived by his family, including his mother and three siblings, as well as his many comrades and friends in Detroit and around the country. A memorial tribute to Comrade Kevin will take place on Saturday, July 13, at 2 p.m., at the Detroit WWP building, 5920 Second Ave., Detroit, MI 48202. Kevin Carey, ¡presente!