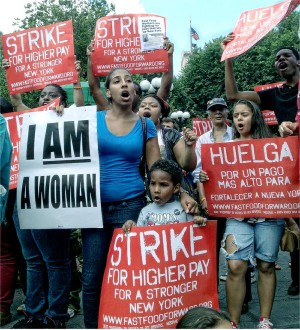 July 29 — “We can’t survive on $7.25!” and “What’s outrageous? Poverty wages!” chanted hundreds of striking fast-food workers and their supporters outside a McDonald’s restaurant in New York City’s Union Square. Similar job actions were held at other NYC locations, including in midtown Manhattan and downtown Brooklyn, and in five other U.S. cities.

These brave workers, mostly African American and Latino/a, insisted: “We deserve a living wage!” While demanding the right to organize into a union, they stressed, “New York is a union town!” Their militant spirit was expressed in their chant: “The workers have a right! Fight! Fight! Fight!”

People’s Power Assembly organizers came in solidarity with the workers and distributed a leaflet linking the struggle for low-wage workers to that for “Justice for Trayvon Martin.”

Each day of organized protests brings more support. Dozens of community, labor and faith-based groupings have joined this campaign. In addition to the organizations listed above, Jobs with Justice and Action Now are involved, among others.

Momentum is quickly growing in support of these workers and their call for a $15 hourly minimum wage. This call is resonating louder and clearer than ever — and is rapidly becoming a national issue. These workers’ strong, persistent demands on pay and the right to organize, gain medical benefits and be guaranteed workplace respect are being heard — because they’re fighting back!

The workers taking on this struggle are courageous. They are risking jobs they so desperately need to pay for essential expenses like rent and food for their families. Many work two and three jobs to do so. Yet, they are standing up to the most powerful corporations, which make super-profits from their labor. McDonald’s alone is worth $100 billion, yet the company refuses to pay its workers a living wage.

These fast-food workers are blazing the road ahead for all workers, employed and unemployed, who have been hit hard by the economic crisis, rising cost of living, growing income inequality and corporate downsizing of their standard of living. Not only would their victory help the 4 million employed in this industry, but it would be a boon for all workers.