July 16 — Workers World Party joins with millions of people inside the U.S. and around the world in condemning in the strongest terms the “not guilty” verdict in the second-degree murder trial of George Zimmerman. Zimmerman fatally shot unarmed 17-year-old Trayvon Martin on Feb. 26, 2012.

WWP also salutes the masses of all nationalities and ages who have organized and joined protests, large and small, to demand justice for Trayvon Martin. One major factor about these protests is that they have helped to unite a broad spectrum of expressions, ranging from anger, frustration, sorrow to defiance against a blatant travesty of justice. We especially salute those “no business as usual” protests, like the thousands of people who shut down Times Square on July 14 as they sat down in the streets for more than an hour, and the hundreds who shut down busy Freeway 10 in Los Angeles. 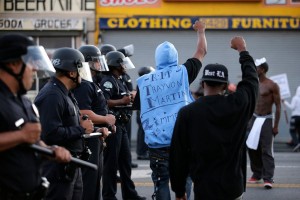 In an inspiring show of Black and Brown solidarity, the Dream Defenders — an immigrant youth-led civil rights group — have initiated “Take Over Tuesday” — a sit-in of Black people and Latinos/as, including children, at the Florida governor’s office in Tallahassee today to demand a repeal of the repressive Stand Your Ground law in honor of Trayvon.

We deplore the shameful displays of police violence during the demonstrations. After marchers left Times Square July 14 to join a protest in Harlem, the police, dressed in full riot gear, targeted and arrested 14 young people.

In Los Angeles, police used rubber bullets and bean-bag weapons, mainly against frustrated Black youth who carried out a mini-rebellion July 15 following a rally at Leimert Park. This rebellion was sparked not only by the “not guilty” verdict but was also a justifiable outlet for these youth, who are “all Trayvon Martin” because they are demonized and criminalized on a daily basis by the police, the courts, the prisons and the lack of jobs. Fourteen youth were arrested so far.

WWP demands unconditional amnesty for all those arrested or detained during these protests. To rebel is not a crime. It’s the criminal justice system that is to blame.

Trayvon lynched not once but twice

By now, everyone knows that Zimmerman, a wannabe cop and watchman in a gated community in Sanford, Fla., stalked Martin because of who he was — Black — and what he wore — a hoodie. Even after being told by a police dispatcher not to confront Martin, Zimmerman attacked him anyway and then killed him. Zimmerman was allowed to walk free for six weeks by the police and powers-that-be until massive protests nationwide forced his arrest.

That was the first lynching of Martin.

The second lynching of Martin took place during the court proceedings. The trial judge put restraints on the prosecution that kept evidence from being presented that Martin was racially profiled by Zimmerman, who had a known history of viewing Black youth as “suspicious.” Zimmerman’s defense team was given free rein to put Martin on trial as the “aggressor” and portray their client as the “victim,” thus justifying Martin’s killing.

But Martin was the victim, not Zimmerman, and had the right to defend himself by any means.

The judge even allowed the defense to show the jury during the summation an outrageous fictional animation, based solely on Zimmerman’s account, of Martin attacking Zimmerman. And then there was the jury of six women, five of whom were white and one Latina. Not one Black person was picked for the jury, even though Sanford’s Black population is close to 29 percent.

In an all-too-familiar scenario, Trayvon Martin, a mere 17-year-old with a can of iced tea in one hand and a bag of Skittles in the other, a young person looking forward to a bright future, had his life tragically cut short by a racist society where youth of color are branded as less than human. It is a grim reminder that the legacy of slavery and racist oppression is alive and well in the U.S., where vigilantes like Zimmerman as well as the police have declared war on poor youth, especially if they are Black, Latino/a, Arab, Muslim or Indigenous.

So the jury, the judge, the defense and even the prosecution, who had smirks on their faces during a press conference following the verdict on July 13, were willing players in an unjust “justice” system, which is structurally poisoned with venomous racism and other forms of class bias to keep the multinational working class divided and weak.

How else can one explain the double standard in which well-paid Black football athletes like Michael Vick and Plaxico Burress each have had to spend several years in prison — one for abusing dogs, the other for shooting himself in the leg — while a bigot like Zimmerman spends not one day in prison after admittedly killing a human being just because he felt “threatened”? That goes beyond the boundaries of reason.

The underlying killer of Trayvon Martin

The capitalist system is ultimately responsible for the murder of Trayvon Martin and countless others whose only “crime” is being a youth of color. Institutionalized racism, based on centuries-old white supremacist ideology, is central to keeping a tiny minority of the super-rich in power by impoverishing more and more workers with low wages, foreclosures, school and hospital closings, unemployment, underemployment, and mass incarceration and deportations.

The Occupy Wall Street development of almost two years ago was an important barometer showing that capitalism can no longer offer a once-privileged sector of white youth any bright future of prosperity. These youth are becoming more conscious of the fact that they have more in common with poor, working-class youth, especially youth of color, than with the corporate bankers and bosses popularly known as the 1%.

If capitalism is slowly but surely coming to a dead end, what can replace it? There is only one long-term solution: organizing on a massive scale to uproot the present system of capitalism and create an economic system that can lay the basis for eradicating the deep-seated oppression of people of color, women, lesbian-gay-bi-trans-queer people and immigrants.

Capitalism needs to constantly foster inequality and prejudices in order to keep its hold over all the workers that it exploits. To end exploitation and all forms of oppression, we need to fight for socialism, where the workers would become the owners of the vast means of production, break the chains of wage slavery and any remnants of feudal relations, and use their ability to work to meet the needs of all society through cooperation. The struggle to empower the workers and oppressed, not elections, is the only instrument by which such true equality can be realized. One vehicle to organize for this power is through people’s power/workers assemblies, which have already taken shape in cities such as Baltimore, San Diego and throughout North Carolina.

While fighting for a socialist future is the goal of many revolutionaries, we must continue to monitor how the current righteous anger over the Zimmerman verdict will play out in the coming days, weeks and months and strategize on how best to help channel this righteous anger into a broad, organized fightback.

The image of Trayvon Martin will continue to be a national symbol of what every youth of color and their families in the U.S. fear: being demonized and dehumanized by legal and extralegal terror under capitalism, fueled by racism.

Justice for Trayvon Martin must become a clarion call to all who want to unite every struggle in a show of class solidarity — like a mighty fist raised against a system that can offer nothing but oppression, racism and war.