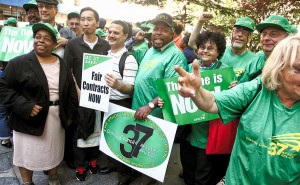 Johnnie Stevens, an organizer with Parents to Improve School Transportation, told Workers World: “Billionaire Mayor [Michael] Bloomberg admits that not giving city workers the raises they deserve has saved the city $7.8 billion. That’s $7.8 billion that the city has taken out of the pockets of its workers.”

A speaker at the rally said that New York City had accumulated a $40 billion surplus over the last 11 years.

Bloomberg admitted in a June 2 Daily News op-ed that he wants his intransigence to put his successor in a position to demand harsh concessions from the unions. The unions — which are asking current mayoral candidates where they stand before endorsing — won’t be able to wait another four years without a contract.

The Bloomberg administration has set harsh terms for all contracts. They include no retroactive pay, which is traditionally part of a delayed contract; raises only in exchange for vacation time and sick days; and substantial worker contributions for health care costs, now generally covered by the city.

No new union contract offered by the city lets members keep up with inflation. As a result, no union has accepted the mayor’s terms.

Some big unions like the United Federation of Teachers, which represents New York’s 100,000 teachers, have been working under an expired contract for more than four years.

However, the teachers have had their contract modified — to their detriment. Bloomberg used a state law to impose a new evaluation system on teachers, “to hold their feet to the fire,” as he put it. (NY Daily News, Dec. 7) This system is based on extensive testing of pupils, which many teachers feel interferes with their teaching.

Some of the material tested this year had just recently been introduced to teachers and students. Teachers have said they fear losing their jobs if the scores of their students on these tests are low.

More than half the demonstrators wore UFT T-shirts. As one handmade sign noted, “Department of Education wants to ‘recruit, retain and reward effective teachers.’ Where’s my reward? Fair contract now!”

Speakers urged unity among the unions present. Although some pointed out there were no politicians on the podium for this union event, the only action speakers raised was to vote, but for whom wasn’t specified. The major unions in the MLC have each endorsed a different Democratic candidate for mayor, which might be one reason no politician was on the podium.