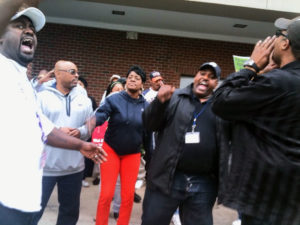 Close to 100 supporters of Walmart workers demonstrated June 7 outside the Walmart Super Center in Dearborn, Mich. Among them were members of Good Jobs Now and the Service Employees, Food and Commercial Workers, United Auto Workers and Steelworkers unions.

Demonstraters called on Walmart to give its workers a raise and for the government to raise the minimum wage. A popular chant was “Down with the billionaires, up with the workers.”

That same day UAW Region 1A held a second demonstration at another Walmart in the Detroit area.