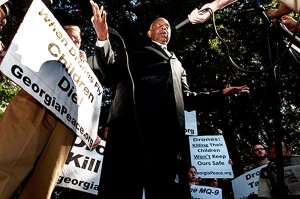 An upscale Atlanta hotel was the venue for an international conference on drones that brought scientists and researchers, manufacturers, investors, government and police officials, and representatives of the military together to project the future applications of unmanned aerial devices.

Alarmed and outraged by the U.S. use of drones in assassinations in countries such as Pakistan and Yemen and the threat to civil liberties everywhere, the Georgia Peace and Justice Coalition/Atlanta initiated a call for daily protests during the four-day meeting, May 28-31.

A press conference on the opening day, May 28, received extensive media coverage, since President Obama — reacting to growing opposition to the expanded use of drones by his administration, including the killing of U.S. citizens abroad — had just declared changes in his policy. The speakers at the media event included Azadeh Shahshahani, president of the National Lawyers Guild and ACLU of Georgia staff member; Georgia State professor Henry Carey; All-African Peoples Revolutionary Party leader, Sobukwe Shukura; Courtney Hanson of Women’s Action for New Directions; and Joe Beasley, Rainbow/PUSH Southern regional director and Air Force veteran.

At the conclusion of the press conference, a delegation led by civil rights leader Joe Beasley entered the hotel, determined to take their objections directly to the conference meeting room. Although stopped by hotel security, the group held their ground in the lobby, complete with their large signs, declaring drones a terrorist weapon and the killer of children.

Each successive day, a protest was held outside the hotel, presenting a visible anti-drone message to the steady flow of traffic on one of Atlanta’s major thoroughfares.

A conference spokesperson tried to deny the criminal use of drones by stating that the conference was concentrating on benign uses such as monitoring climate change, but the closing day’s keynote speaker went to the crux of the matter. His topic, “Future Air Force Vision for Remotely Piloted Aircraft,” urged greater development of drones to ensure U.S. command of global airspace and conflict zones.