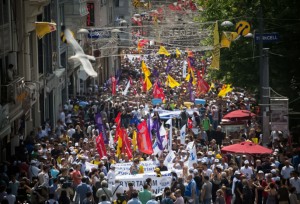 Union workers march into Taksim Square during a strike in support of the protests, Istanbul, June 4.

June 4 — A small protest to keep a green space in downtown Istanbul from being turned into a giant shopping mall that began on May 30 has become a massive popular movement. Demonstrators have heroically challenged brutal police, who have used tear and pepper gas, truncheons, water cannon, smoke grenades and rubber bullets against the unarmed Turkish and Kurdish people.

Their heroism has aroused solidarity demonstrations from nearby Greece to far-off Australia, which joined the protest against Turkey’s neoliberal prime minister, Recep Tayyip Erdogan. He with his Islamic-based Justice and Development Party (AKP) have been elected three times since 2002.

Today, the two major leftist union confederations, KESK — representing 240,000 public sector workers — and DISK began a general strike. KESK changed its trade union demands to solidarity with the mass demonstration. Workers will wear black clothes and ribbons. A successful strike, which is to continue on June 5, will give a strong working-class character to the protest wave.

When the Istanbul police reacted violently against the first group of hundreds of demonstrators trying to stop the government from cutting down 606 trees in Gezi Park, thousands joined, defying police. The next day, 40,000 marched over a bridge from the Asian side of Istanbul across the Bosphorus to join thousands of others in Taksim Square.

Demonstrators, now in the hundreds of thousands in 50 Turkish cities, included youths gathered by social media, the opposition secular Republican People’s Party (CHP) and even members of rival soccer clubs.

Leftist forces like the Communist Party of Turkey (TKP) and the Revolutionary Peoples’ Liberation Front (DHKP) were in the front line of the street battles. The TKP’s Ankara branch called for both the government and the “dictator” Erdogan to resign. (tkp.org.tr)

Taksim Square, like Tahrir Square in Egypt, has symbolic importance. While pro-government forces deny parallels with the “Arab Spring,” the struggle that opened up is similar to Egypt’s in that it has rallied diverse sectors of Turkish society against an authoritarian government. Divergent class forces are participating in the mass anti-government actions and attempting to win the participants to their particular interests.

Taksim Square was the scene of a massacre of workers in 1977 by the U.S.-backed Turkish regime.

Despite Turkey’s recent economic growth, the benefits have been uneven under the pro-capitalist, neoliberal policies of the AKP. This party is close to and have depended on support from the reactionary monarchies in Qatar and Saudi Arabia. The AKP has pursued a ruthless neoliberal agenda of layoffs, cutbacks and union busting.

The richest 20 percent of Turkey’s 75 million people account for more than a half of national income, whereas the poorest 20 percent have just 6 percent.Taxation is done mainly by regressive sales taxes that hurt poor people the most.

The AKP is a right-wing split from the now defunct Islamic Virtue Party, which was funded by Qatar and Saudi Arabia. It’s initial popular appeal was based on lessening the political power of Turkey’s NATO-linked military, which imposed a brutal martial law regime from 1979 to 1984 and enshrined a special role for itself in the Constitution. Erdogan also eased repression against the Kurdish people, as it was based on Islam rather than Turkish nationalism, and by its closer relations with the Arab and Islamic world, including Iran.

Erdogan had opened negotiations with the Kurdistan Workers Party (PKK), the group that with a guerrilla war has fought for Kurdish self-determination since 1984 in the Kurdish regions ruled by Turkey .

Erdogan, who has begun a foreign relations trip to North Africa, has stood behind the police repression — which has already resulted in 1,500 arrests, hundreds badly wounded and at least four demonstrators killed. He called demonstrators “extremists” and “a bunch of looters” and belittled the protests as a temporary blip. (AP, June 3)

Deputy Prime Minister Bulent Arinc, left at home to face the masses,  apologized June 4 to the demonstrators injured by the police actions.

Like Egypt and Iran, Turkey is a regional power in Western Asia, even though it has been dependent militarily on U.S. imperialism and economically on German imperialism for much of the period since World War II. Turkey is a member of NATO and during the Cold War had its military lined up against the Soviet Union. Turkish soldiers fought under U.S. command in Korea in 1950-1953 against the Democratic People’s Republic of Korea.

Most recently, Erdogan has made Turkey the frontline state in the imperialist effort to overthrow the government of Bashar al-Assad in Syria. This has drawn Turkey closer to what is an extremely unpopular war among a majority in Turkey, and demonstrators have shown their opposition to the war. A few weeks ago, after a car-bombing in a border town with Syria carried out by the opposition to Assad, strong demonstrations in Turkey erupted against the government’s anti-Syria policies.

Washington showed its orientation toward Erdogan last March when President Barack Obama succeeded in pushing Israeli Prime Minister Bibi Netanyahu to publicly apologize to Erdogan for the Israeli murder of Turkish citizens on a ship, the Mavi Marmara, bringing relief supplies to Palestinian Gaza three years ago. This diplomatic effort indicated Washington’s reliance on the Turkish government to carry on the offensive against Syria.

Washington had a cautious public response to the latest events, expressing sympathy with the demonstrators against repression but continuing support for the Turkish government’s finding a way to quiet the protests.

U.S. imperialism has no real interests in defending the rights of anti-government demonstrators, either in Taksim Square or in Zuccotti Park in downtown Manhattan. The U.S. caution shows that Washington is uncertain where the demonstrations will lead.

As in Egypt, Washington’s closest collaborators in Turkey are its generals, who continue to wield enormous influence behind the political scene.

One of the many demonstrations worldwide was organized by the Communist Party of Greece and its youth organization in Athens on June 3, and called for “unity of the workers of Greece and Turkey against capitalism.” (tkp.org.tr)

*Bill Dores contributed to this article.