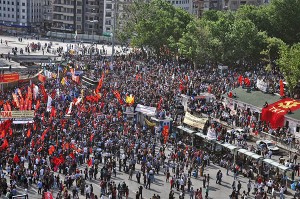 June 3 — A small protest to hold onto a green space in downtown Istanbul that began five days ago has grown to a massive movement against the Turkish prime minister, Recep Tayyip Erdogan, and his Islamic-based Justice and Development Party (AKP), which has ruled the country since its first electoral victory in 2003.

When the Istanbul police reacted violently against the first group of hundreds of demonstrators trying to stop the government from cutting down 606 trees and replacing them with a giant shopping mall and the replication of a historical military barracks, tens of thousands of people in Istanbul came out in defiance of the police.

By the third day, hundreds of thousands of demonstrators from different sectors of Turkish society came out in the major Turkish cities — Istanbul, Ankara, Izmir and others — to protest against the government. The government even had to pull the police out of central Istanbul and allow access to the giant Taksim Square.

Demonstrators included youths gathered by social media, the opposition secular Republican People’s Party (CHP) and even members of rival soccer clubs that were uncharacteristically united against the government. But it also included leftist forces like the Turkish Communist Party, which has joined the protest and is calling for spreading and continuing the struggle. 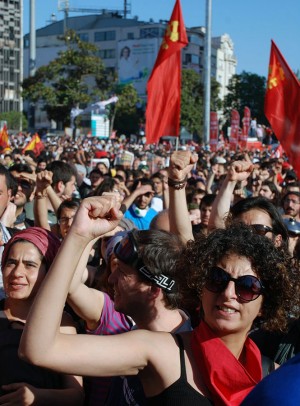 Such an intervention by the massive Turkish working class would give enormous weight to the anti-government protests that by now have taken place in all of the 81 provinces ruled by the Turkish state. It would also push them in a clearly progressive direction.

While the struggle has not reached yet the intensity of the Egyptian revolution in Tahrir Square more than two years ago, it is similar in that it has rallied all sorts of diverse sectors of Turkish society against an authoritarian government. It is apparent that as of now divergent class forces are participating in the anti-government actions and attempting to win the participants to their particular interests.

A sign of the division in Turkey’s ruling political circles — and by extension, in Turkey’s dominant capitalist class — was made apparent by the sharp differences expressed by government leaders.

Erdogan has stood behind the police repression — which has already resulted in 1,500 arrests, hundreds badly wounded, and some reportedly killed in the demonstrations. He called the demonstrators “extremists” and a “a bunch of looters” and belittled the protests as a temporary blip. Erdogan’s party has won three elections since 2003. (AP, June 3)

The same article reported that Turkish President Abdullah Gul has defended the right of the demonstrators to protest, stating, “Democracy does not mean elections alone.”

Some of the opposition forces in Turkey were able to raise $55,000 to place an ad in the New York Times criticizing the Erdogan government and sympathizing with the demonstrators.

Like Egypt and Iran, Turkey is a regional power in Western Asia, even though it has been dependent militarily on U.S. imperialism and economically on German imperialism for much of the period since World War II. Turkey is a member of NATO and during the Cold War had its military lined up against the Soviet Union. Turkish soldiers fought under U.S. command in Korea in 1950-1953 against the Democratic People’s Republic of Korea.

Most recently, Erdogan has made Turkey the frontline state in the imperialist effort to overthrow the government of Bashar al-Assad in Syria. This has drawn Turkey closer to what is an extremely unpopular war among a majority in Turkey. We have seen no reports, however, of slogans opposing this war among the demonstrators.

Erdogan has opened negotiations with the Kurdistan Workers Party (PKK), the group that with a guerrilla war has defended Kurdish rights since 1984 in the Kurdish regions ruled by Turkey .

Washington showed its orientation toward Erdogan last March when President Barack Obama succeeded in pushing Israeli Prime Minister Bibi Netanyahu to publicly apologize to Erdogan for the Israeli murder of Turkish citizens on a ship, the Mavi Marmara, bringing relief supplies to Palestinian Gaza three years ago. It indicated Washington’s reliance on the Turkish government to carry on the offensive against Syria.

Washington had a cautious public response to the latest events, expressing sympathy with the demonstrators against repression but contining support of the Turkish government. A June 3 AP story reported, “Presidential spokesman Jay Carney called them ordinary citizens exercising their rights to free expression.

“But Carney also said that all democracies have to work through issues, adding that Washington is concerned about Turkey’s response to protesters but expects the U.S. ally to work through the issue while respecting its citizens’ rights.”

U.S. imperialism has no real interests in defending the rights of anti-government demonstrators, either in Taksim Square or in Zuccotti Park in downtown Manhattan. Thus, this statement indicates the U.S. government is uncertain where the Turkish demonstrations are headed.

There is no doubt the U.S. would intervene however it could to prevent the Turkish working class from gaining the leadership of a mass popular uprising in its NATO ally and client state. Washington’s closest collaborators inside Turkey are with the Turkish armed forces, which seized power in the country with a coup in 1980 and which has continued to wield enormous influence behind the political scene.