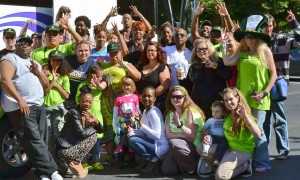 Some of the many ‘Riders for Respect’ headed to Walmart’s world headquarters. Photo: Organization United for Respect

Walmart workers across the United States resumed their strike at the end of May and began caravaning toward Bentonville, Ark., the site of Walmart headquarters and the company’s annual shareholders’ convention scheduled for June 7. The morning of June 3 strikers and their supporters set up picket lines in Bentonville.

Organizers from OUR Walmart — short for Organization United for Respect — report that the number of workers who have joined the protest has increased by 25 percent, and some experts are going so far as to say that the movement has reached a “critical mass.” “The current strikes suggest that the campaign for better wages and improved working conditions at Walmart is here to stay,” said John Logan, a professor of labor and employment studies at San Francisco State University. Logan believes the strikes are a symptom of the campaign’s durability. (Huffington Post, May 30)

Walmart has a long history of abusing its workers and suppressing strikes through illegal means. It was recently cited for dumping toxic sludge into California’s sanitary sewers and has been sued by women workers for rampant sex discrimination. Documents unearthed by Bangladeshi labor rights activists in the aftermath of a horrendous factory collapse, which killed more than 1,100 workers, revealed that jeans produced there were sold under contract by Walmart.

When workers speak up about the company’s misdeeds, Walmart is quick to resort to naked state repression, noted the HP article. “If there is somehow a disruption in their stores [like employees speaking up for their rights] … our management is equipped to ask folks to leave,” said Brooke Buchanan, a spokesperson for Walmart. She went on to say, “The next opportunity is to call the police.”

But despite their illegal intimidating tactics, Walmart’s bosses are finding it harder to hide from the workers who make their huge profits possible. On May 29, a group of Walmart workers assembled outside the residence of Yahoo! CEO Marissa Mayer, who serves on Walmart’s Board of Directors.

Gathering outside Mayer’s 38th floor penthouse apartment in San Francisco, protesters donned bright green T-shirts and chanted, “Stand up, live better!” (San Francisco Bay Guardian Online, May 30) The protest was timed to coincide with the start of the strike and the caravan.

Picking up the baton of Dr. King

Dominic Ware, who works part-time at a Walmart in San Leandro, said he earns $8.65 an hour and stays with his grandmother since his paycheck isn’t enough to cover rent and provide for his 7-year-old daughter. He estimated that roughly half his earnings go back to Walmart, where he purchases groceries and other basic items.

Ware said he was going on strike and caravaning to demand a higher level of respect for Walmart employees and to protest Walmart’s intimidation of those who stand up to the company. He described the frustration of an elderly coworker who has been unable to have her work shift adjusted to make it possible for her to catch a bus home, instead of walking late at night.

Walmart was recently slammed by a new “white paper” published by American Rights at Work. The paper documented over 150 instances of Walmart’s interference with workers’ lawful activity, the company’s efforts to create a climate of fear at its workplaces, and even attempts to silence the communities in which the workers live. (“Fighting for a Voice,” May 2013)

On May 26, OUR Walmart kicked off the nationwide “Ride for Respect” bus tour, which will bring a caravan of protesting workers and allies to almost 30 cities across the country before arriving in Bentonville, Ark. There, members of Ride for Respect will attempt to confront company executives and shareholders. In honor of the Civil Rights movement, some trekkers are following the route of the Freedom Riders of the 1960s.

Sarita Gupta, executive director of the Jobs with Justice labor coalition, says that the OUR Walmart riders are “picking up the baton of economic justice” left behind by the Civil Rights campaign and the Rev. Dr. Martin Luther King Jr.’s focus on class and poverty. (MSNBC, May 28)

Among the caravaners coming from Baltimore, Md., is Rev. C. D. Witherspoon, president of the Baltimore Southern Christian Leadership Conference and an organizer of the Baltimore People’s Power Assembly. Witherspoon was a key leader of the historic 2013 Poor People’s March from Baltimore to Washington, D.C., which took place May 11-12. The march, which was supported by a large contingent of OUR Walmart workers, commemorated the Poor People’s March initiated by King in 1968, shortly before he was assassinated.

“Dr. Martin Luther King Jr. died while leading a strike by some of the poorest workers in the country,” Witherspoon told Workers World. “He looked forward to a day when all poor and working people will not only have decent wages and working conditions, but the respect to which any human being is entitled. We must all do whatever we can to make sure that Dr. King’s dream is fulfilled.”