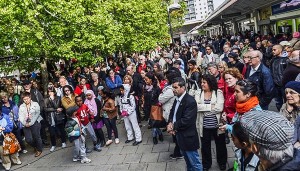 Protest against police violence in Husby, northern Stockholm, Sweden, on May 22.

Many were shocked at the week of rebellion that began May 19 in the suburb of Husby just outside Stockholm, Sweden, a city which is known for its social services programs, clean commercial districts and neighborhoods. The rebellion that spread to other regions of the country illustrated the anger and frustration of young people, who are largely descendants of immigrants from Western Asia and Africa.

The resistance began when police actions resulted in the death of a 70-year-old Portuguese immigrant in Husby. Officials claimed he had threatened the officers with a machete. Neighborhood sources said that it was no machete, but a knife.

Also, no one was being held hostage, as news reports had indicated and the other person with the man in his apartment was his spouse. Apparently the couple had problems with some youths in the neighborhood, and when police arrived the couple was responding to an already tense and hostile dispute.

This conflict may have been the spark that ignited a week of arson against vehicles and buildings and attacks on businesses, the police and firefighting forces. The underlying reasons, however, are that many youth within this Scandinavian state are jobless and all from these communities are subject to police harassment.

During the week, the rebellions spread to other Swedish cities: Malmo, Gothenburg, Orebro and Akersberga. Reports indicate that at least 100 people have been arrested and no deaths reported since the demise of the initial victim.

Sweden’s center-right governments have deeply cut social service programs over the last decade during a gradual economic decline during the 1990s and the overall world capitalist crisis that has hit all of Europe since 2007. The suburban areas around Stockholm and other cities are now home to immigrants from Iraq, Iran, Kurdistan, Turkey and ­Somalia, et al., and their Sweden-born children, along with a new influx of refugees from Syria in response to the Western-backed war of aggression and regime change.

The growing immigrant communities make up about 15 percent of Sweden’s population. A far-right party has surfaced, the Swedish Democrats, which is gaining support among the Europeans and seeking to politically exploit the latest events. The SD now has 20 representatives in the country’s 349-member Parliament. Jimmie Akesson, the party’s leader, has called for the deportation of noncitizens involved in what he calls criminal activity.

Making matters even worse, center-right Prime Minister Fredrik Reinfeldt of the Moderate Party, called the young people in the streets “hooligans” (Reuters, May 23). He refused to consider racism, growing inequality, lack of opportunity and police brutality as being central to the rebellion.

Barbo Sorman, a spokesperson for the opposition Left Party, pointed to these ills and added that “Sweden was starting to look like the United States.” (New York Times, May 27)

Sweden, though it remained capitalist and aligned with the imperialist West, had a social democratic government for 40 years until the 1970s. This brought more extensive social programs and avoided extreme poverty. Since the 1990s, when there was an economic downturn, these social programs have declined. The rightist regime has continued to cut these programs.

According to a report issued by the United Nations-affiliated Organization for Economic Cooperation and Development, Sweden has the fastest growing rate of income inequality among all the 34 OECD members. This is a similar pattern within most Western capitalist states, which in part is the result of government policies that allow unregulated profit making efforts by the wealthy.

The unrest in Sweden follows similar outbreaks in other European states. This includes England, where, two summers ago, dozens of cities were hit by rebellions in response to police brutality and the cutbacks in social services that disproportionately impacted Blacks and other oppressed groups within the society.

In Paris beginning in 2005, widespread attacks on private property and the police spread throughout the country’s immigrant suburbs. Racism and the lack of economic opportunities were also behind the rebellions there. North African-origin and African immigrant communities are trapped outside the major French cities in suburbs where there are very few jobs, and police patrol these areas as if they are war zones.

Barar Mohamed, a 15-year-old youth whose parents are immigrants from Somalia, pointed out: “So maybe I am lucky to be in Europe. Compared to people in Somalia, maybe I am lucky. But I have hardly ever even met them, and this is where I live, and I have to live with police brutality, and I don’t have the same chance as the Swedish kids. I am Swedish. I am Swedish.” (Independent, May 26)

As the economic crisis persists in Europe and the immigrant communities continue to be used as scapegoats for the decline in living standards and the growing class divisions, more rebellions will take place throughout the continent. Working-class Europeans have no choice but to join alliances with the people of color communities to form a united front against austerity and the assaults on the social service programs that had been conceded to the workers’ struggles during the Cold War period following the end of World War II.