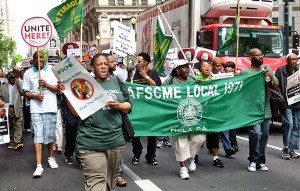 “Welcome to the city that doesn’t pay their workers.”

That’s how Pat Eiding, Philadelphia council president of the AFL-CIO, introduced the “Mayors’ Innovation Summit” of the U.S. Conference of Mayors held in Philadelphia on May 22-24 and hosted by its president, Philadelphia’s “Mayor 1%” Michael Nutter.

Nutter has recently overseen the closing of 25 Philadelphia public schools, along with an increase in poverty, imprisonment, police violence and destruction of the public sector union jobs and services due to his forced austerity programs for the people here.

Holding signs which read, “No More Mayor for the 1%, Lets Build a Better Philadelphia for ALL,” over 500 workers assembled at the opening of the conference, blocking traffic in front of the nonunion Westin Hotel in Center City.

Leading the demonstration were the city workers of the American Federation of State, County and Municipal Empolyees District Councils 33 and 47 as well as Local 1971, with their sea of green and their shrieking whistles. City workers have gone five years without a raise, while their pensions have lost value and their health benefits have become more costly.

“The mayor would rather go to the courts than negotiate,” said Pete Matthews, president of District Council 33. “If we don’t get a contract we will shut this city down. Not one city worker will work! I don’t care what the cost is. People fought life and death for this. This is the biggest fight you have ever seen in this city.”

Shouting “No contract, no peace!” 400 more people assembled on the second day of the conference and marched to City Hall to deliver a petition with some 3,000 signatures to the City Council to demand a fair contract with no concessions.

While the mayors met with executives from Comcast, Google and Urban Outfitters, Nutter did not once mention the plight of city workers in Philadelphia. Meanwhile, the crisis for city workers and their families has only deepened.

A study by Michael Bognanno, Temple University associate professor of Economics, reported: “The analysis shows that a significant portion of the combined membership of District Council 33 and 47 are below the poverty line set for a sole earner in a family of four [$35,310]. The extent of the membership below the poverty line has roughly doubled since 2007, the period of time in which the membership has gone without a pay increase.” (dc47afscme.org, see important documents)

The budget crisis facing Philadelphia city workers, teachers, firefighters and virtually every other worker for the past five years has been created by the crisis of the economic system of capitalism. Based on a small group of incredibly wealthy people who control the political, economic and social conditions of the rest of humanity, capitalism has reached a dead end.

In effect, the need for capitalist production to be profitable, combined with the enormous increase in productivity through new technology, has made it impossible for the capitalist economy to resume growth.

Public workers, who serve the people without regard to whether their work is directly profitable, are under attack by a vast confluence of forces involving Democrats and Republicans, corporate executives and their lobbyists. This coordinated attack on public services on the one hand gives priority to having state and local governments pay back loans and interest to the banks.

On the other hand, these forces seek to create a new profitable sector by privatizing existing public services, like schools. Yet the austerity measures which seek to privatize jobs while busting unions and lowering living standards for millions will never bring the system back to life. Destroying these living wage jobs and replacing them with minimum wage jobs means workers can buy even less of the goods and services they produce. This aggravates the capitalist crisis.

Yet there is a way out. Consider the inspirational words of Pete Matthews in the streets in front of the U.S. Conference of Mayors that were cited earlier in this article. Workers have the ability to shut down every part of society. Not a wheel can turn nor a burger be flipped without the millions of members of the working class.

Now is the time to prepare, to organize workplaces and to unite workers on a common program of demands for our human rights, demands which the capitalists in Washington, on Wall Street and in the City Halls are unwilling and unable to meet. With this, we can begin to build a society run by workers, not Mayor Nutter and his corporate allies.