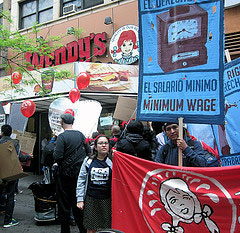 Some 300 farmworkers and their supporters from New York’s labor and progressive community marched and rallied May 18 to tell Wendy’s to join the Coalition of Immokalee Workers’ Fair Food Program like other fast-food chains have.

Since tomato pickers are farmworkers, they are not covered by labor law in Florida or federally. They have no right to form a union, work an eight-hour day, have coverage for on-the-job accidents or bargain over working conditions.

Instead of forming a union, they’ve set up an association, funded by a one-cent-a-pound levy on the tomatoes they pick. Under CIW’s Fair Food Program, this levy is paid by growers’ customers like McDonald’s, Burger King and others.

Wendy’s wants to proclaim it has “implemented sustainable practices“ and “honest ingredients,” but doesn’t want to let the workers who supply its ingredients have shade and water in the fields where they work or be free from sexual harassment.