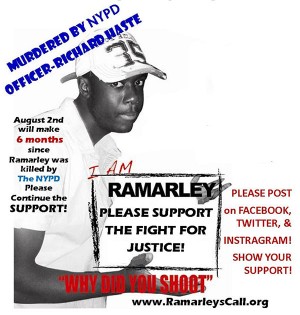 Ramarley Graham was shot in his bathroom by police officer Richard Haste. The unarmed Bronx teenager was killed on Feb. 2, 2012, in front of his grandmother and six-year-old brother.

Graham’s family had to endure more grief on May 15 when Judge Steven L. Barrett threw out Haste’s indictment for manslaughter. Barrett claims the grand jury was told to ignore whether Haste thought Graham had a gun.

Nobody ever saw Ramarley Graham with a gun. The cops themselves said all they saw on the street was Graham allegedly adjusting his waistband.

That was enough for police to chase the Black teenager, to break down the door to his home and for Haste to pull the trigger.

Judge Barrett said that Haste’s so-called justification was “central to this case.” What justification is there to shoot an unarmed person? “There might be a different measure of reasonableness,” said Barrett, if the cop thought Graham was armed. (guardian.co.uk, May 8)

There was nothing reasonable about Richard Haste killing Ramarley Graham in his own bathroom.

The family, all the Bronx outraged

This latest outrage won’t prevent ­Graham’s family from seeking justice for their son.

“We are going to keep fighting no matter what,” said Ramarley’s father, Frank Graham. “We will never stop until justice is served in this case, until Richard Haste goes to prison for murdering our son.” (amsterdamnews.com, May 16)

The killing of Ramarley Graham is another bloody example of the racist war against poor people. In New York City alone, cops have killed at least 228 people since Amadou Diallo was shot 41 times on Feb. 4, 1999.

None of the killers in blue has been sent to jail. Former Gov. George Pataki moved the trial of Diallo’s killers out of the Bronx to guarantee their acquittal.

The cop who killed unarmed Malcolm Ferguson on March 1, 2000, in the Bronx was never even indicted. Neither was the policeman who killed 13-year-old Nicholas Naquan Heyward Jr. on Sept. 22, 1994, in Brooklyn’s Gowanus Houses.

The two detectives who pumped 22 bullets into 18-year-old Anthony Rosario and 21-year-old Hilton Vega on Jan. 12, 1995, in the Bronx were never brought to justice. The killers had been volunteer bodyguards for former Mayor Rudy Giuliani.

Nineteen-year-old Timur Person was shot five times by police in the Bronx, killing him on Dec. 13, 2006. Three weeks before, 50 bullets were fired at Sean Bell in Jamaica, Queens, killing him on what was to be his wedding day.

The only reason any cops were indicted for killing Sean Bell were massive protests, which included 50,000 people marching down Fifth Avenue in Manhattan. After a non-jury “bench” trial, the judge sent the killers free.

The FBI lied when it proclaimed former Black Panther Party member Assata Shakur to be a terrorist. Fortunately, Shakur is shielded by 11 million Cuban people, who’ve also provided asylum for many other political prisoners.

The real terrorists in the Bronx, and everywhere in the United States, are the police.