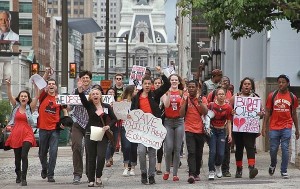 “No ifs! No buts! No education cuts!” was the chant by hundreds of students from several Philadelphia public high schools who walked out of classes May 9 in a spontaneous, militant march protesting $60 million in additonal education cuts. The demonstration was organized largely through online messaging and Facebook.

After twice circling City Hall in Center City, the students blocked the streets and brought traffic to a halt in front of the School District’s North Broad Street office. They wanted to drive home the message that they will not accept these additional cuts proposed by the city to fill a projected $300 million budget shortfall, coming on top of the closure of 23 schools approved earlier this year.

Two days earlier on May 7, around 250 students brought instruments and staged an impromptu “musical” outside a School Reform Commission budget hearing. They had learned that they face additional cuts after already losing nurses, central office staff and funding for an annual musical at the performing arts high school as part of earlier cuts.

If passed, this second round of cuts would eliminate art, music, sports and other extracurricular programs and result in additional teacher layoffs. The SRC, which previously authorized the school closing plan, now wants teachers to accept draconian cuts in salaries and benefits while giving up seniority and other job protection clauses from earlier labor contracts.

The students also focused on the fact that May 10 is “Teacher Appreciation Day.” Teyin Tseng, a member of the student council at the High School for Creative and Performing Arts, said students had hoped to pool their money to buy flowers for every teacher, but when they learned of the planned layoffs and program cuts they decided the walkout was a more fitting tribute. (Axisphilly.org May 9)

Student signs addressed their concerns to the SRC and School District Superintendent William R. Hite Jr. One read, “We appreciate our teachers, Dr. Hite. Do you?” Another read, “You can silence our teachers, but you can’t silence us.” The Facebook page calling for the walkout carried the message: “As students we are fed up and want to be heard. It’s OUR education and WE should have a say in it. … [T]here is strength in numbers.”