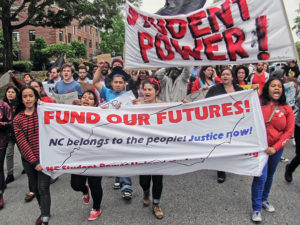 Raleigh, N.C. — On May Day, the NC Student Power Union mobilized more than 350 students from 10 colleges from all around North Carolina to participate in a demonstration against the Legislature’s regressive agenda.

Students began their day with a rally at the North Carolina State University Bell Tower and then marched to the Civitas Institute, a far-right think tank funded by multimillionaire and deputy state budget director, Art Pope. The demonstration raised opposition to the avalanche of backwards policies being advanced by legislators. They joined a broader coalition of workers, immigrant rights groups and many other community organizations for a march from Moore Square Park to the North Carolina Legislature.

When the march arrived at Jones Street, students, young people and others took over the street, and five sat down with a banner that read, “We Demand a Future! Stop budget cuts! Stop racist voter laws! Stop attacks on workers!”

During the street occupation, which lasted for nearly an hour, leaders of the Congressional Black Caucus, the North Carolina NAACP, the AFL-CIO and the Southern Workers Assembly, among others, delivered messages of support and solidarity as students spoke out against the attacks.

Demonstrators then attempted to bring their demands for justice into the Legislature and five were arrested — Jessica Injejikian from the University of North Carolina at Charlotte, Tristan Munchel and Dhruv Pathak from UNC Greensboro, and Zaina Alsous and Carissa Morrison from UNC Chapel Hill. All five were charged with disorderly conduct, and Morrison and Pathak were additionally charged with misdemeanor assault on a government official.

“We stand behind these five students who took a bold and powerful action today and put their bodies on the line to stop the attacks on the people of North Carolina,” said Juan Miranda, a student at UNCG. “Our hope is that many others are inspired to join the fightback against these forces from destroying our state and taking us backwards. We will fight these charges to the end. The fact that these students were arrested simply for peacefully trying to enter and bring their demands into the ‘People’s House’ is absurd, and the additional charges that Morrison and Pathak received are entirely baseless.”

In a statement, Pathak explained why he participated in civil disobedience: “Education should be affordable and accessible to all students. The right-wing Legislature and current budget proposal will make it harder for students to get into school and stay in school. My family struggles with finances every day and has trouble making ends meet. The last thing I need is a multimillionaire writing the state budget who wants to take away my financial aid. … That’s why I took this action today.”

Students have vowed that they will be back to continue demonstrations throughout the summer with other organizations, and as long as is needed.