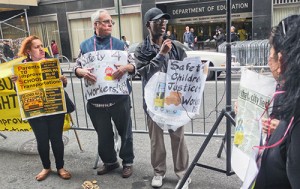 A “Rally to Save Busing” was well received by lunch hour crowds in downtown Brooklyn on April 19. The citywide group Parents to Improve School Transportation (PIST NYC) chose the site where the Department of Education — controlled by billionaire Mayor Michael Bloomberg — has its contracts office.

Flyers for the event charged authorities with disregarding the needs of school bus riders before, during and since the strike by Amalgamated Transit Union Local 1181 this winter. Some 8,800 drivers and attendants struck for a month when contract bids went out without an Employee Protection Provision that would maintain seniority hiring.

At the rally, busing advocates gave out copies of their School Bus Bill of Rights proposal, along with copies of an April 12 New York Daily News column by Juan Gonzalez that exposed how the city’s own lawyers are now arguing in court that EPP is not illegal. This implies that the mayor knowingly lied when he insisted that the union wanted something illegal in the school bus bids.

While some parents took to the microphone, others gathered contact information from interested passersby and shop owners or spoke to reporters. The event was also recorded for the upcoming film “1181: A Documentary.”

Bronx PIST leader Milagros Cancel, whose three sons depend on busing for their education, spoke in Spanish about the need to organize against violations of the civil rights of students with disabilities, including violations of their right to adequate transportation.

Other protesters included grandparents, a retired teacher with the Movement of Rank and File Educators (MORE) Caucus of the United Federation of Teachers, and a 10-year-old mini-wagon rider.

Joining them was a Brooklyn school bus driver with over 20 years’ experience whose company gave her job to a strikebreaker. She is one of 76 workers who are still locked out two months after the strike ended.

ATU Local 1181 has taken up the lockouts with the National Labor Relations Board and has another NLRB case against the school bus contractors’ recent unilateral imposition of lowered wages, benefits and hours. Drivers and attendants had their spring break checks withheld; beginning April 15, paychecks were expected to be 7.5 percent lower than before.

As Manhattan mom Madeline Sinor said on News 12 TV, “They are cutting, to the bone, the wages of trained, excellent workers who are so important.” The union is pressing for good faith negotiations. DOE has not commented on these developments, although it is the ultimate contractor.

The message of the rally was that school bus families plan to fight to prevent such a vital service for students from being downgraded to a part-time, high-turnover, poverty-level job. For more information, contact [email protected] or 347-504-3310.

Catalinotto is a co-founder of PIST.