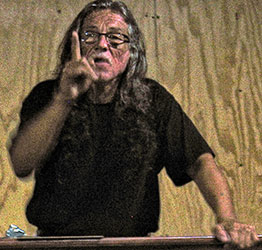 Dacajeweiah, whose name means Splitting-the-Sky, died at the age of 61 on March 13. He is pictured here speaking in his hometown of Buffalo, N.Y., in 2011 on the 40th anniversary of the Attica prison rebellion.

His many friends and comrades held a memorial tribute at Burning Books bookstore in Buffalo on April 5 to honor and celebrate his life and work. There was Native drumming and Friendship Song. Many inspiring stories were told of Dacajeweiah’s courage and leadership.

He was remembered as a warrior, a fighter for the rights of Indigenous nations and peoples all over the world. He was known most widely for his important role in the 1971 Attica uprising and the struggle for justice that followed over so many years, including battles such as the one at Gustafsen Lake in British Columbia. His friends and family spoke of his passionate vision of a struggle wider than prisoners’ or Native rights, a struggle that would change and save the world from racism and greed.