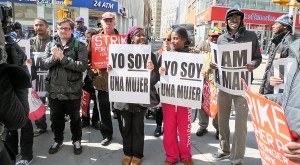 April 4 — Fast-food workers have walked out on strike today at locations throughout New York City to mark the 45th anniversary of the assassination of Dr. Martin Luther King Jr. and to continue his legacy of struggling for jobs and justice.

In front of the downtown Brooklyn, N.Y., Wendy’s restaurant this morning, workers and their supporters chanted, “We can’t survive on $7.25!” and “We want change! Not pennies!” A large rally will take place this evening at Marcus Garvey Park in Harlem.

Members of the Fast Food Workers Organizing Committee put out a statement today issued by ALIGN NY on why they are striking and need the community’s support:

“Fast food workers are living in poverty without enough to meet our basic needs. Many of us rely on food stamps and some of us live in homeless shelters. Meanwhile, the $200 billion fast food industry continues to profit from our work without retuning those profits to our communities and New York City’s economy.

“But worst of all, they think we can be ignored. Help us show that we’re not just ‘cheap labor,’ but men and women who want nothing more than to be treated with dignity and … earn an honest living.

“Forty-five years ago, sanitation workers in Memphis, TN, were facing the same struggle. They went on strike to demand dignity for all workers. Joined by the Rev. Dr. Martin Luther King, Jr. on the eve of his assassination, Memphis strikers declared to the world, ‘I AM A MAN.’ …

“Following in the footsteps of the 1968 Memphis sanitation strikers and the Rev. Dr. Martin Luther King, Jr., we will tell the world we are men, we are women, we are people. And we will not be ignored.

“In November, fast food workers in New York took part in an historic strike to demand $15 an hour and the right to form a union without intimidation. Since then, our numbers have grown and our resolve has strengthened. We are proud to continue in the tradition of civil rights crusaders who came before us and we will not stop until our voices are heard and we have a seat at the table.

“We’re on strike today because we can’t survive on $7.25. Higher wages will help us raise our families with dignity but will also help lift our entire economy. More money in the hands of workers means more money spent in local shops and a boost for our community.

“As Memphis sanitation striker Alvin Turner said, ‘in order to win, you have to stand up and be counted.’”