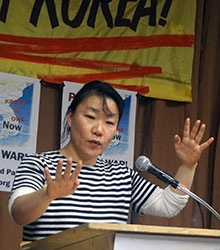 The situation is very, very urgent. We are very worried that this time a war may happen. A lot of media are portraying the increased tension as if north Korea is making belligerent, unprovoked statements. But actually they are in response to the threat that they are receiving. As of this moment, the Key Resolve [U.S.-south Korea military exercises] just ended, and the Foal Eagle joint training begins, which involves 25,000 U.S. soldiers plus 53,000 south Korean soldiers, right around the [demilitarized zone]. So the entire country goes on an alert for two months.

On the KCNA website [the news agency of the Democratic People’s Republic of Korea], the banner used to read, “Word for word, action for action.” That they would not back off from the threat that they were feeling or perceiving. Now the banner reads, “We are ready for a great war of national reunification.” Those kinds of statements have been made before — every time they did a satellite launch, every time they did a nuclear test. However, this time we think the situation has changed a lot. The military tension is higher than in the past.

On March 28, the New York Times reported that two U.S. nuclear-armed Stealth bombers went over south Korea and did simulated bombing exercises [against the north]. This is the first time. They never did this in south Korea before.

Also, the toughest U.N. sanctions have been imposed. They include especially a financial freeze. No money can be sent into north Korea, and they cannot send any money out — to their diplomats or students, for instance. Everyone is in a frozen state at this point. That creates a serious health crisis, because no medicines are going in. But all [the media] talk about is a freeze on “luxury goods.”

In the media the north Korean leaders are always portrayed as the menace, the evil, and the people as very helpless — suffering, starving. You see these images of goose-stepping soldiers only, and not of a people who are determined — as workers, as mothers, as soldiers — to build this strong nation. This portrayal of an evil, powerful leadership and a helpless people, with no self-will, invites what? It invites third-party intervention. The powerful U.S. then comes in as a rescuer. This kind of juxtaposition justifies and invites an intervention. 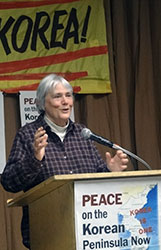 Korea has never invaded the U.S. But the U.S. sent 5.7 million troops to Korea during the war, and for three years the U.S. Air Force destroyed everything it could in the north, dropping more bombs than were dropped in Europe in all of World War II.

Ever since, the U.S. has occupied the south and kept the north in the crosshairs of its planes and ships stationed in the Pacific, many of which are armed with nuclear weapons.

So it is ludicrous to say, as all the corporate media here do, that the DPRK is irrational when it strengthens its defenses and warns against a U.S. attack. No country in the world is more justified in having a nuclear deterrent and a strong defense than the DPRK.

Just think of how many countries have been laid waste by U.S. imperialist intervention in the last 10 years alone. After seeing what has happened to Iraq, Syria, Libya, Yugoslavia, Somalia — haven’t the Koreans drawn the lesson from this that you don’t give up your weapons?

Ever since the Korean war ended in 1953, the U.S. has tried to strangle the DPRK economically. Nevertheless, it was able to rebuild very quickly — the standard of living in the north surpassed that in the south by the 1970s. It has only been since the destruction of the USSR and the rightward turn in People’s China that U.S. efforts to cripple the economy through sanctions and military pressures have cut deep.

Washington’s strategy is clear: Make life so difficult for the north Korean people that their will to resist will weaken. But that has not happened. On the contrary, they have supported strengthening their armed defense at the same time that they make even greater efforts to modernize their economy.

How are they able to do all this?

It’s because of the respect and confidence that the Workers’ Party of Korea has won over decades of struggle.

It is truly a workers’ party, based in the masses of people. I saw this on a trip to the DPRK in 1988, on the 40th anniversary of the founding of the DPRK. The great leader of the Korean Revolution, Kim Il Sung, spoke at a national meeting of the party cadre. Thousands of workers and war veterans, women and men of all ages, packed a large convention hall. They had the strong hands and weathered faces of people who know what work is. One million people marched the next day.

No suburbs or dachas ring Pyongyang. It’s the only city I know of that has no slums and no private mansions. The planned streets, beautiful public buildings and modern apartments are surrounded by fields of collective farms.

The wealth of the DPRK is in the public sector — libraries, schools, museums, hospitals. A recent article in the New York Times described how — miraculously! — a dairy farm in Indiana is able to supply all its energy needs from methane gas derived from animal droppings. I saw that more than 20 years ago on a collective farm in the DPRK, where trucks, tractors and cooking stoves were run on methane “cooked” from manure.

The DPRK has one of the best educational systems in the world. Every farm has a library and classrooms for continued adult education in science, agronomy, etc.

The Cubans have a saying: “Se puede mucho juntos.” We can do a lot — together. That’s the spirit in the DPRK, too, where the solidarity of the people through their party makes it possible to resist the world’s most aggressive imperialist power.