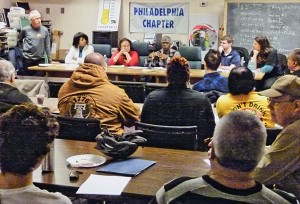 Philadelphia — Against a background of mounting attacks on public employee unions here, community and labor activists came together March 11 to address their common crisis at a forum against the privatization of postal, education and other government services.

Stevens began by stressing the importance of organizing community support for the unions that provide vital services. He discussed his recent experience with Parents to Improve School Transportation (PIST) in galvanizing the community behind striking New York City school bus workers trying to defend their union.

Stevens also gave the example of youth in Harlem, active with the Occupy Wall Street movement, who took over a post office to drive home the point that postal jobs are one of the few places youth without higher education can get jobs with decent wages and benefits.

Piette told the crowd: “Whether we’re postal workers, teachers, state store workers, city workers or neighborhood activists, the drive to privatize adversely affects all our communities. The services we provide are not only decreased or eliminated, but lower-paid jobs through privatization mean more poverty for our neighborhoods.

“Since the 1970s, corporations have exported millions of formerly union jobs to low-wage countries. These greedy billionaires have the gall to continue lowering our wages and benefits and attacking union jobs in the U.S., even when their profits are high.”

Piette said: “The percent of workers in unions today is down to 1929 levels, leaving many without health care and pensions. … The austerity budget being pushed through Congress will furlough federal workers and cut funding for social programs from school lunches to environmental protection. Only the interest payments to the bankers — over $450 billion — are shielded from the ‘sequester.’”

Gwen Ivey, president of the Philadelphia American Postal Workers Union, stressed: “What’s happening with the post office is not due to the decline of mail or because people don’t want to work.  The bigger monster we’re dealing with wants to privatize it all. In 2006, Congress mandated pre-funding of health benefits for workers who might not even be hired for 75 years. They are sabotaging the post office. Customers are made to stand in long lines. They want you to take your business somewhere else.”

“They didn’t notify the union of plans to close 15 stations here,” said Ivey.  “We found out by word of mouth.  We held rallies and were able to save all but three.  We have to stick together. It’s not just about postal workers not getting paid, it’s about services to our communities.”

Rosa María de la Torre of CLUPJS talked about how the organization came about in the Chelsea area of New York, where she has worked as a tenant organizer for 18 years. “We knew all the issues are linked,” she said. “CLUPJS is now a national organization dealing with a very local, very intimate neighborhood issue. With privatization, everything will be more expensive. We are already seeing the impact of these attacks on our block with mom-and-pop stores boarded up and replaced with banks and Starbucks. … ‘Affordable’ housing is geared to people making $75,000 and up. … This is affecting the quality of life of everyone in our area. Along with our local post office, tenants, seniors, youth and postal workers are all on the list to be shut down,” she concluded.

“Every year, $530 million from sales at the state stores goes into the state treasury to be used to benefit every resident of Pennsylvania.  Although only 43 percent of people in the state drink alcohol, 100 percent benefit,” Naylor noted. “Corbett’s proposal would turn this public profit over to Walmart, Rite Aid and convenience stores like 7-Eleven.”

Danyell Dahn, a Philadelphia Federation of Teachers member and an organizer with the Teachers’ Action Group, said the efforts to sabotage the post office are exactly like what is happening with education. “The issue is about inequality. It’s not about an achievement gap, it’s about an income gap,” she said.

“The Philadelphia School Reform Commission closed 23 public schools, yet the one item in the budget that went up was money for charter schools and a huge amount at that. Then the district leaked their proposed contract to the PFT that the district would ‘no longer be responsible for providing books, teachers’ desks, copy machines or water fountains’ in the schools, while seeking longer work hours, elimination of seniority and major cuts in pay and benefits of up to 13 percent with no raise in pay until 2017.”

Gwen Snyder, executive director of Philadelphia Jobs with Justice, commented that the SRC had a plan to close the schools years ago.  “Corporate America’s plan for this decade is to privatize the hell out of the public sector and destroy the unions. We have been constantly fighting a defensive battle. We need to be voting with our feet to expose the lie that ‘privatization is good for the people.’” Snyder was one of 19 demonstrators arrested attempting to stop the March 7 SRC meeting when they voted to close schools.

No borders in workers’ struggles

A lively discussion followed the speakers. One person commented that the sale of wine and spirits in convenience stores would keep a lot of young people from getting summer jobs since workers must be over 21 to sell alcohol.  Another called for a movement like the Montgomery Bus Boycott to boycott any agency attempting to privatize. Patrice K. Armstead with Building People’s Power spoke of the need to educate parents on the history and value of public schools and to let them know how detrimental it is to privatize.

Berta Joubert-Ceci of Workers World Party raised how new ways of struggle in Latin America, particularly in Venezuela, are leading workers to take control over their workplaces. “Before the Occupy movement, there was the struggle by the Chicago Windows and Doors workers, who occupied their factory to save their jobs and won. The Bank of America didn’t want to give money to the owners to make payroll.”

Noting that most of those workers were Latinos and Latinas, Joubert-Ceci stated: “Our fight is a global one. The old saying that ‘there are no borders in the workers’ struggle’ is even truer today.”

People were urged to pack City Hall on March 14 to stop Philadelphia Mayor Michael Nutter’s attempt to impose a contract on American Federation of State, County and Municipal Employees District Council 33 and to rally on March 24 in support of the call by the National Association of Letters Carriers to “Save Our Post Office!”